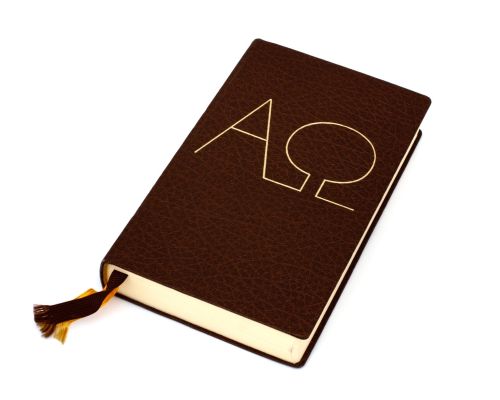 I am Alpha and Omega, the beginning and the ending, saith the Lord, which is, and which was, and which is to come, the Almighty.  (Revelation 1:8)

These words recorded by the Apostle John, the one “whom Jesus loved” (John 13:23; 20:2; 21:7, 20), introduce the One who would “reveal” the details of the final events of world history. At this time, John was an old man probably in his nineties, exiled on the island of Patmos “for the word of God, and for the testimony of Jesus Christ” (Revelation 1:9). It was Sunday, “the Lord’s Day,” and John was “in the Spirit” (Revelation 1:10).  John does not say, but I imagine that he was reading and meditating on Daniel’s prophecy and praying. John earned the nickname “Camel Knees” (so I am told) for the calluses he developed from hours on his knees in prayer. While in that posture, “a great voice, as of a trumpet” interrupted his meditation, and the resurrected Lord introduced Himself as “Alpha and Omega, the first and the last” (Revelation 1:10-11).

John recognized Him, although he had never seen Him like this before – “clothed with a garment down to the foot, and girt about the paps with a golden girdle. His head and his hairs were white like wool, as white as snow; and his eyes were as a flame of fire; And his feet like unto fine brass, as if they burned in a furnace; and his voice as the sound of many waters” (Revelation 1:13-15). John, in the company of Peter and James, witnessed Jesus transfigured on the mountain (Luke 9:28-36) in the days of Jesus’ short ministry on earth. That experience left the disciples awestruck, but it was nothing compared to this appearance.

Alpha, the first letter in the Greek alphabet, represents the beginning of the Word. In his Gospel, John wrote, “In the beginning was the Word, and the Word was with God, and the Word was God. The same was in the beginning with God. All things were made by him; and without him was not any thing made that was made” (John 1:1-3, emphasis mine). The Word of God, the Holy Bible, opens with the same phrase: “In the beginning God created the heaven and the earth” (Genesis 1:1, emphasis mine). God, the “uni-plural” Elohim, created the universe – all things – through His spoken Word: “And God said, Let there be light: and there was light. And God saw the light, that it was good: and God divided the light from the darkness” (Genesis 1:3-4, emphasis mine). John says, “In him [the Word] was life; and the life was the light of men. And the light shineth in darkness; and the darkness comprehended it not” (John 1:4-5, emphasis mine).

The Alpha of the Bible goes on to describe the six-day creation acts of God. On the sixth day, the Elohim created all the land-dwelling animals, and at last, He created man. “And God said, Let us make man in our image, after our likeness: and let them have dominion over the fish of the sea, and over the fowl of the air, and over the cattle, and over all the earth, and over every creeping thing that creepeth upon the earth. So God created man in his own image, in the image of God created he him; male and female created he them” (Genesis 1:26-27, emphasis mine). The switch between the plural (us/our) and the singular (his/he) provides the first insight (in English) to the triune nature of God, which is developed later in Scripture. However, in the original language of Hebrew, that insight appears in the very first verse. God (Elohim) is the plural form of the noun for god (el); however, the verb “created” (bara) appears in the singular form, which under other circumstances would be a grammatical booboo in Hebrew.

So, God creates man in His own image, which among other things, implies that man too is triune in nature. One aspect of that triune nature involves the physical form that animates and transports “the soul” of man. “And the LORD God formed man of the dust of the ground, and breathed into his nostrils the breath of life; and man became a living soul” (Genesis 2:7, emphasis mine). What physical shape would reflect “the image of God”? The Hebrew word translated “formed,” yâtsar, describes the work of a potter molding and shaping a lump of clay into a useful vessel. The Word, by whom “all things were made,” molded and shaped the kind of body He would one day inhabit. “And the Word was made flesh, and dwelt among us, (and we beheld his glory, the glory as of the only begotten of the Father,) full of grace and truth” (John 1:14, emphasis mine).

God took His image bearer “And the LORD God planted a garden eastward in Eden; and there he put the man whom he had formed” (Genesis 2:8). There God provided for man’s every need. The Garden of Eden provided an abundance of food and water (Genesis 2:9-10) with a perfect climate (Genesis 2:5-6). Best of all, sickness and death did not exist. God gave His stamp of approval on His perfect creation. “And God saw every thing that he had made, and, behold, it was very good. And the evening and the morning were the sixth day” (Genesis 1:31, emphasis mine). Death could not exist in a “very good” creation because the Bible says that death is “the last enemy” (1 Corinthians 15:26).

God and His image enjoyed intimate fellowship as God walked “in the garden in the cool of the day” (Genesis 3:8). However, love coerced is not love. Love must be a willful choice, and God allowed for the choice. “And the LORD God commanded the man, saying, Of every tree of the garden thou mayest freely eat: But of the tree of the knowledge of good and evil, thou shalt not eat of it: for in the day that thou eatest thereof [dying] thou shalt surely die” (Genesis 2:16-17, emphasis mine). Death did not exist in the Garden of Eden, but the potential did exist. Man had the choice, and man made the wrong choice. “And when the woman saw that the tree was good for food, and that it was pleasant to the eyes, and a tree to be desired to make one wise, she took of the fruit thereof, and did eat, and gave also unto her husband with her; and he did eat” (Genesis 3:6, emphasis mine). Man made the choice, and death entered God’s perfect creation.

The remainder of the Bible tells the story of God’s work in restoring fellowship with His fallen and dying creation. Only the blood of a perfect and innocent victim could make amends or reparation for the perpetual infraction. “For the life of the flesh is in the blood: and I have given it to you upon the altar to make an atonement for your souls: for it is the blood that maketh an atonement for the soul” (Leviticus 17:11, emphasis mine). The blood of animals fell short of the requirement because it was man, not animals, that sinned. “For it is not possible that the blood of bulls and of goats should take away sins” (Hebrews 10:4). The atoning blood-sacrifice must be that of a perfect, innocent man; nothing less would do. However, no man fit the bill, for “As it is written, There is none righteous, no, not one” (Romans 3:10). No human solution could be found. Therefore, “the Word was made flesh, and dwelt among us” (John 1:14, emphasis mine). “But [the Word] made himself of no reputation, and took upon him the form of a servant, and was made in the likeness of men: And being found in fashion as a man, he humbled himself, and became obedient unto death, even the death of the cross” (Philippians 2:7-8, emphasis mine). “But this man [the Word], after he had offered one sacrifice for sins for ever, sat down on the right hand of God” (Hebrews 10:12, emphasis mine). The debt is paid in full, and God offers the pardon as a gift to whoever will accept it. A choice must still be made – accept the gift or reject it. Love is not coerced.

2 responses to “Alpha And Omega”