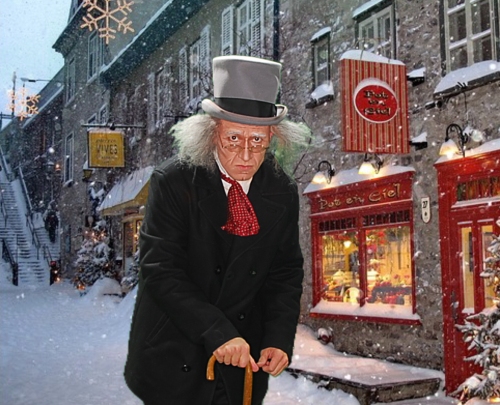 At the risk of being labeled a Scrooge, I feel compelled to express my growing disillusion with the Christmas season and all the trappings associated with it.  Don’t get me wrong; I love Christmas, or at least I love what Christmas is supposed to signify – the condescension of the Creator God to take on the human form of His creation embodied in a helpless baby.  The thought is too awesome for words!  Yet that idea is all but lost in the midst of the tumult that has become “the holiday season.”

Beginning in October, even before the celebration of death (Halloween), which God calls the enemy (1 Corinthians 15:26) and Thanksgiving, which has become more a ritual of gluttony and football than a time to seriously pause to give thanks to God for all of His provision, the Christmas mass-marketing scheme is in full force.  This year on Thanksgiving Day the tryptophan was not even out of our systems when stores opened late to get a jump on the Black Friday spending spree.

The saying that “Christmas is for children” is meaningless these days.  Marketeers cleverly target the growing avarice in our society by creating the illusion that their product will bring genuine happiness or fill some sort of desperate need.  Mercedes-Benz has Santa loading up cars on delivery trucks – one line of red cars for his “naughty” list and white for his “nice” list.  So, even if you are “naughty” Santa will still get you what you want.  Buick has a commercial where a young man is presenting his wife (I hope) a new car for Christmas, when a brand new Buick Enclave drives by and the young woman loses interest in the car her husband (I hope) has given her as she stares lustfully after the Enclave.  Lexus, Cadillac, Nissan, etc. all have ads tempting the viewer through “the lust of the flesh, the lust of the eyes and the pride of life” (1 John 2:16).  Car manufacturers are not the only culprits.  Rosetta Stone has a cute commercial where a little boy is brought to Santa.  Santa addresses the boy in English, the boy responds in German, so Santa instantly switches to speaking German because Santa learned to speak German by using the Rosetta Stone language learning software.  The list could go on and on.

I hear Christians lament the commercialization of Christmas, but we are just as guilty as the secular world of going overboard on spending just because “it’s the season of giving.”  We bemoan the “war on Christmas” but our Christian radio stations are just as likely to play “Rockin’ Around the Christmas Tree” as “Oh Come All Ye Faithful.”  Big mega church productions of Christmas pageants typically devote the first half of the program to secular music and dancing (choreography for Baptists) and reserve the best for last – the true Christmas story.  What I am saying is that we are guilty of accommodating at best, or assimilating with, at worst, the secular world.  Then we whine because the world is losing the real meaning of Christmas!  Well, I have news! Christmas, although not called by that name, has always been a pagan celebration.  We stole their celebration, put a Christian spin on it, and now we are complaining because they are taking it back!

Without going into great detail that you can “Google” on your own, Christmas was not observed in the early Christian church until around the mid fourth century when Pope Julius I (A.D. 337-352) sanctioned the celebration of the Nativity to coincide with the Roman celebration of the winter solstice called Saturnalia.  Santa Claus originated from a third century bishop by the name of Nicholas of Myra (in Turkey) who was renowned for his generosity, which, by the way, was not limited to December 25th.  We can thank Clement C. Moore (1779 – 1863) for the red suit and the “miniature sleigh and eight tiny reindeer.”

The Christmas tree is considered by some as Christianisation [sic] of pagan tradition and ritual surrounding the Winter Solstice, which included the use of evergreen boughs, and an adaptation of pagan tree worship; according to eighth-century biographer Æddi Stephanus, Saint Boniface (634–709), who was a missionary in Germany, took an axe to an oak tree dedicated to Thor and pointed out a fir tree, which he stated was a more fitting object of reverence because it pointed to heaven and it had a triangular shape, which he said was symbolic of the Trinity. (Wikipedia)

As Christians, we should know that Jesus was not born on December 25th, but most likely sometime in late August or September.  When you think about it, God probably kept the date of His birth a secret precisely so that we would not turn it into the circus it has become.  He is not interested in our participation in meaningless rituals, but rather our genuine devotion to Him at all times.  What would happen if Christians stopped shopping for Christmas gifts for one another and instead gave that money spent to the Lord?  Would we be any less blessed?  My guess is that God would bless us even more!  What would happen to the commercialism of Christmas if Christians stopped buying?  Maybe the commercialization would become less overt. What if we practiced our generosity all year round and not reserve it just for Christmas?  What if we celebrated Christ’s advent all year round instead of just once a year?  What difference does December 25th make?  What is important is that God came into this world as a baby, to experience the same aches and pains we experience, to be faced with the same temptations we face, and then to willingly take our place on the cross to pay the death penalty we owed.  Our gifts should be presented to the One who saves, not to the ones He died to save.  That God took on human form in order to redeem us unto Himself is a significant event worthy of remembrance, but perhaps in a way that honors Him, not our own hubris.