And Cain went out from the presence of the LORD, and dwelt in the land of Nod, on the east of Eden. And Cain knew his wife; and she conceived, and bare Enoch … (Genesis 4:16-17)

The question of Cain’s wife comes up often with both serious students of the Bible and skeptics. The low hanging fruit tempts the skeptic to ridicule the Bible for the omission of important details. After all, the Bible only speaks of Cain and Abel; no others siblings are mentioned. If the skeptic adheres to evolutionary/atheistic thinking, he may use this to support his perspective by claiming there were many hominids around before the mythical first couple came around. Cain must have gotten his wife from one of the many available to him.

The Bible student may find himself without a defense because the skeptic is clearly correct – there are no other people mentioned at this point. Genesis 4 records the first family, which includes Adam, Eve, Cain and Abel; no others are mentioned. So where did Cain get his wife? Is the skeptic correct?

This can pose a serious problem even to a seminary trained “professional” because there seems to be no clear-cut answer. But here I want to direct my attention directly to those who claim to believe in the infallibility and inerrancy of Scripture. If you are reading this now, and have doubts about the veracity of the Bible, you are welcome to check it out now.

If we believe that the Bible is the inspired Word of God, that it is without error and it is true in every respect – infallible, than we must accept it for what it says – period. Starting from the beginning, God created one man and one woman (Genesis 1:26-27; Genesis 2:7, 21-22). That was all; no other “hominid kind” were created. “And God blessed them, and God said unto them, Be fruitful, and multiply” (Genesis 1:28). In Genesis 4:1 Cain is born and in the next verse we are introduced to Abel. “And in process of time it came to pass” (Genesis 4:3) that a long period of time transpires and the boys are fully grown. The Bible gives no indication as to how much time elapsed between the first and second sentence of verse 2. Seth, the son to replace the murdered Abel, is born 130 years from Adam’s creation (Genesis 5:3), which means Cain and Abel could have been anywhere from around 30 to 129 years old. That said, “the days of Adam after he had begotten Seth were eight hundred years: and he begat sons and daughters” (Genesis 5:4, emphasis mine). It seems unlikely that in that span of time between the birth of Abel and the birth of Seth, Adam and Eve abstained from procreative activity. It is quite likely that they had a plethora of boys and girls – one every two to three years is not unreasonable.

At this point, the serious student of the Bible must conclude that Cain’s wife was one of his sisters. Did I hear a collective “Yuck!” out there? Suddenly someone recalls the biblical prohibition against marrying a close relative (Leviticus 18:6-20), so Cain cannot take a sister for his wife because that is prohibited by God’s Law. Here, science can aid our understanding of Scripture.

Let us first examine the time frame between creation and the time the Law was given to Moses. From Creation to the Flood was about 1656 years (Genesis 5). From the Flood to birth of Abraham was another 290 years (Genesis 11)[1]. From the birth of Abraham (Abram) until Israel went into Egypt was another 218, and Israel was in Egypt 430 before the Exodus and then another 40 years of wandering in the wilderness. So, from Creation to the Law was between 2594 years and 2604 years. This means that marrying within the family was not legally prohibited and Cain could indeed marry his sister. Remember that Abraham, Isaac and Jacob all three married close relatives.

Now, for Cain to marry his sister presented no biological problem either, because Adam and Eve were created perfectly – their DNA was perfect. Harmful mutations had not corrupted their DNA, so close family marriages did not present a problem.[2] It took about 2600 years before the genetic load became significant enough for God to intervene by giving the prohibition not to marry a close relative.

Where did Cain get his wife? From his parents; he married his sister. This posed no problem biblically or biologically.

The Star and the Cross 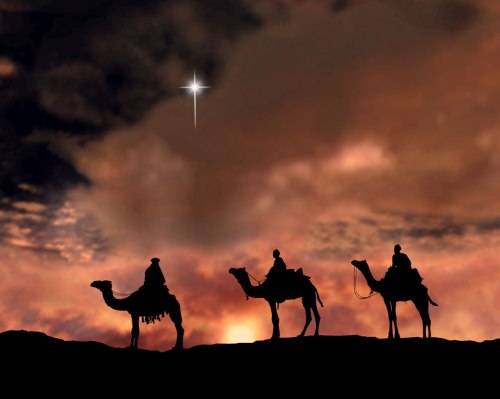 When they saw the star, they rejoiced with exceeding great joy. (Matthew 2:10)

Black was the sky of the oriental night
Bejeweled as an empress displaying her might.
Lost in the tedium of nocturnal watch,
The wisest of wise appraised a new sight.
High in the heavens and brighter than most
A dazzling new object had joined the host.
The astrologers pondered and ventured a guess:
“A mighty new monarch this beacon does toast.”
Consulting their sources and making their plans
The seekers trekked westward across the hot sands.
They followed the beacon that showed them the way
To the City of David, and the Savior of man.
By day and by night they followed the trail
Of their guiding light with much travail,
For a curious sight its beams had revealed
— The form of a cross in full detail.
For two years they followed their stellar guide
Until it rested, and shown with pride
O’er a humble house and the family there
Who with the Mighty King did abide.
So they offered their gifts, their praise to assign
As the cross and the star continued to shine,
And knowing not why, their burden was lifted;
The child in the house did their sorrow consign.
Some thirty years later, on a cross made of wood
The child, now a young man, there hung in the nude,
And the bright Star of Bethlehem continued to blaze,
The King of all kings gave His life to conclude.