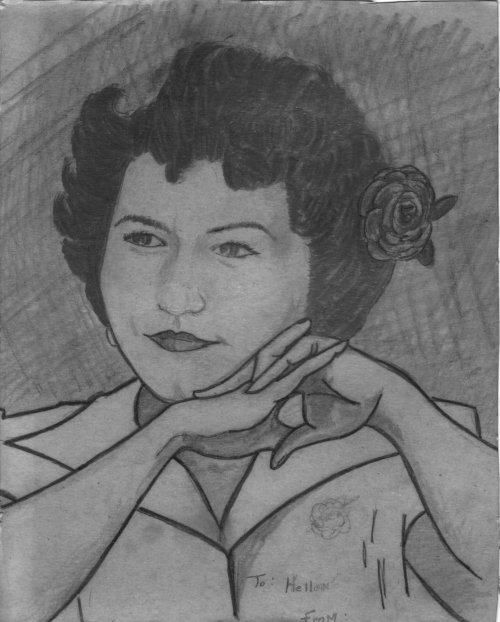 Her children arise up, and call her blessed (Proverbs 31:28)

She was not yet 22 years old when she gave birth to me just a little over 64 years ago. I was not the first. By this time she had given birth to two older brothers who died in infancy, so by default, I was the oldest.

Mom was not well educated having only completed the seventh grade, but she was intelligent and wise. Later in life, after all us kids were grown and gone, she earned her GED which enabled her to secure a position with the State of Texas as a social counselor. She always encouraged us in our education and praised us for every passing grade we earned – a “C” was a passing grade, although “Bs” and “As” earned extra attention, but never money. Mom liked to brag on our achievements no matter how mediocre. I was usually embarrassed by the attention, but deep inside, I liked it. Mom knew the importance of education and she always encouraged us in that endeavor. I still remember her waking us for school every morning to the clarion call of Isaiah 60:1 – “Arise, shine; for thy light is come, and the glory of the LORD is risen upon thee”! And she always had something warm for us for breakfast. Life circumstances prevented me from completing my college education at the age of 21 or 22, but when I earned my bachelors degree at the age of 50, she was there to celebrate the occasion; and she beamed with as much pride as any parent of a 20-year old that just graduated college.

Mom loved to sing! Her favorite part was “segunda” which included both alto and tenor depending on what note best fit her ear. We sang all the time. When we went on road trips, we sang every hymn we could think of, and when we were out of hymns, we would start in on choruses both in Spanish and in English. Then when we had exhausted our repertoire, we would begin again until we reached our destination. After I left home, the songs stopped for me. It was Mom that raised the song in me, I guess, and without her, there was no reason to sing. One hymn that to this day I cannot sing without thinking of Mom and without getting an enormous lump in my throat along with leaky eyes is “God Will Take Care of You.” She must have sung it to me in the cradle a million times. I know I heard her sing it to my two younger brothers and my baby sister. Although, she sang it in Spanish: “Dios Cuidara de Tí.” The words and the tune haunt me to this day – even in English – and I always think of her:

Those words have never failed. I suppose she continues to sing them in heaven because I continue to experience them here on earth.

We were a “low-income” family growing up, but we were never “poor.” Dad earned meager wages as a pastor of small Spanish-speaking churches. During the week he worked behind a cotton stripper shoveling dusty cotton bolls to the back of cotton trailers. Mom worked part time at grocery store or as a waitress, but she was always there when we got home from school. She always made sure we had what we needed. Before our sister came along, Mom liked to dress us all alike, and at Christmastime, we all got the same toys. There was enough sibling rivalry without battles over toys.

Mom was a strict disciplinarian too. He had a six-inch wide hand-tooled leather belt with MEXICO embossed in two-inch letters on the back, and she used it on all of us at least once at one time or another. Anytime we misbehaved, she just needed to mention MEXICO, and we straightened right up. Mom was all of 4’11”, but she commanded a huge amount of respect. The last time my mother attempted to use MEXICO on me, I was 10 years old. By this time, I was about a head taller than her. I don’t remember what I did, but it incited her ire, and she came after me. I took off running, but before I got too far out of her reach, wisdom took a strong hold on me, and I realized that the outcome would be worse, if I persisted in my escape effort. I knew it would go better, if I just faced her. So, I stopped dead in my tracks and turned and faced her. As she raised MEXICO high for the crushing blow, I wrapped my arms around her and started kissing her neck and telling her how much I loved her. She melted into tears and told me that I was too big for her to have to spank me. She never did again. Her tears accomplished more than any spanking could.

Mom spent the last year of her life with June and me. She was in and out of hospitals all that year. It was a hard year for all of us. When she wasn’t in the hospital, we spent a lot of time talking. June was impressed at Mom’s ability to listen and quietly take in what we said. When she finally spoke, her words were few but laden with years of wisdom. One thing that she made clear to us that final year was that she was ready to be with Jesus, and that was her greatest desire. Just before Christmas of 2001, we had just come home from another stent in the hospital. Mom looked at June and said, “No more pills. No more hospitals.” Mom made it past Christmas day, but before the New Year, Jesus granted her greatest desire, and she went to be with Him. Before her departure, while still coherent, her concern was for us. I assured her that everything would be alright. I told her, “Don’t worry, Mom. When you meet Jesus, you are going to look back, and we will be right behind you.” I truly believe that. I don’t think there is a sense of time in heaven like there is here on earth. For me, Mom has been gone so long – almost 13 years. I miss her still, but for her it’s been no time at all.

Some reading this can probably relate similar stories. Our mothers are so precious to us, and often, we do not appreciate them until after they are gone. If you still have your mother, “arise and call her blessed” while she can still hear your voice. Let her know how much she means to you. If your mother is in heaven, as I know mine is, you need to make sure you are on the Only Way to be with her. Happy Mother’s Day.

One response to “Mom”