And we have known and believed the love that God hath to us. God is love; and he that dwelleth in love dwelleth in God, and God in him. (1 John 4:16)

In my last post, “An Angry God,” I tried to perhaps shock readers back into an awareness of the awesomeness of God, by calling attention to the wrath He is capable of displaying. However, He more often restrains His anger because of His mercy.

It is said that familiarity breeds contempt, and that is exactly what happens when all we consider is the kinder, longsuffering, patient and loving side of God. We put Him on a shelf until we need something from Him, and then we plead with all of our heart for Him to answer our prayers. We live our lives no differently than the rest of the world so that an uninterested observer can see no difference between the Christian and the pagan.

God is not someone to be trifled with. Indeed, if He were to confront us, we would be overcome with fear, and we would shake and fall down as dead men (Matthew 28:4). The prophet Isaiah came face to face with the living God (Isaiah 6:1-5). He saw Him high, and lifted up, and the train of His robe filled the temple. He was surrounded by angels who continually chanted, “Holy, Holy, Holy is the LORD of hosts: the whole earth is full of His glory.” At the sight of it all, Isaiah’s strength departed, and he cried out, “Woe is me! for I am undone; because I am a man of unclean lips, and I dwell in the midst of a people of unclean lips: for mine eyes have seen the King, the LORD of hosts” (v. 5). When Peter recognized the power of Christ “he fell down at Jesus’ knees, saying, Depart from me; for I am a sinful man, O Lord” (Luke 5:8). When John saw Jesus in all of His Glory, he said, “when I saw him, I fell at his feet as dead” (Revelation 1:17). God should not be taken lightly or taken for granted. He is GOD! 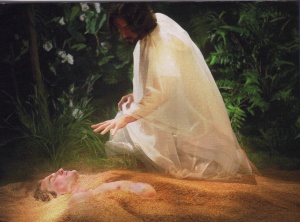 That said, God is a loving God. It is no accident that we find his first loving acts in the creation account in the book of Genesis. In the process of creation, Genesis records that He called all things into being only by His spoken Word. But when He created man, He made him in His own image. Not only that, but Chapter Two provides added detail telling us that “the LORD God formed man of the dust of the ground, and breathed into his nostrils the breath of life; and man became a living soul” (Genesis 2:7). The English word “formed” is the Hebrew word yâtsar which means to mold as a potter might mold a lump of clay to his liking. God took extra care in designing a body like the one He would one day inhabit.

Later after the man sinned by disobeying God’s only prohibition, instead of carrying out the prescribed sentence – “of the tree of the knowledge of good and evil, thou shalt not eat of it: for in the day that thou eatest thereof thou shalt surely die” (Genesis 2:17, emphasis added) – God spared their lives and provided for future redemption: “And I will put enmity between thee [Satan] and the woman, and between thy seed and her seed; it shall bruise thy head, and thou shalt bruise his heel” (Genesis 3:15).

When Cain murdered his brother Abel (Genesis 4), instead of killing him on the spot, God put a mark on Cain to protect him from a vendetta that might have been raised against him.

Almost 1600 years later (Genesis 6-9) mankind had become so wicked and violent that God was ready to end it all. “But Noah found grace in the eyes of the LORD” (Genesis 6:8), and God saved His prized creation in saving Noah and his family.

God is often criticized for His order to the Israelites to wipe out the Canaanites including men, women, children and their animals. The Canaanites were vile, wicked people who practiced child sacrifice and included all kinds of sexual perversions including the use of animals (bestiality) in the worship of the demonic gods – all of which is abhorrent to God. But God did not destroy them all at once as He did Sodom and Gomorrah. Instead, he gave opportunity for the witness of Abraham, Isaac and Jacob to have an effect as they sojourned in their land. God spoke to Abraham, “And he said unto Abram, Know of a surety that thy seed shall be a stranger in a land that is not theirs, and shall serve them; and they shall afflict them four hundred years … But in the fourth generation they shall come hither again: for the iniquity of the Amorites is not yet full” (Genesis 15:13, 16, emphasis added). God allowed for the repentance of these pagans during the time that the Patriarchs were in the land, plus 430 years that Israel was in Egyptian captivity, and 40 more years as Israel wandered the wilderness. That was a total of around 600 years that they had to repent. It may be worth noting, that while God commanded that they wipe them all out to purge the land of their wickedness, Israel did not fully obey God in killing them all. Consequently, they continually struggled with the lure of idolatry, which eventually destroyed the nation. God demonstrates His love through the patience He shows toward sinners in giving them every opportunity to repent, but His patience has limits.

Much more could be said about the love of God, but in the words of the old hymn:

Could we with ink the ocean fill, and were the skies of parchment made,
Were every stalk on earth a quill, and every man a scribe by trade,
To write the love of God above, would drain the ocean dry.
Nor could the scroll contain the whole, though stretched from sky to sky.
(“The Love of God,” Frederick M. Lehman, 1917.)

The greatest act of God’s love was demonstrated when He took upon Himself the form of man, “And being found in fashion as a man, he humbled himself, and became obedient unto death, even the death of the cross” (Philippians 2:8). God’s love is so great that He paid the death penalty in His own flesh to save us from the wrath to come. The wrath of God is nothing to be trifled with, but His love is extended to anyone who is willing to receive it.

One response to “A Loving God”