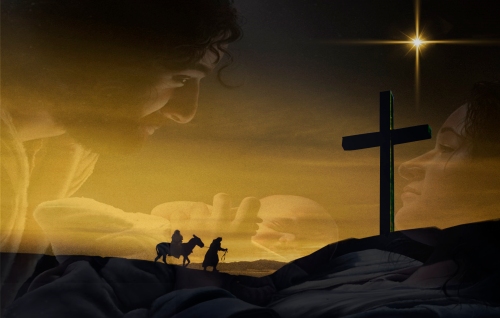 But thou, Bethlehem Ephratah, though thou be little among the thousands of Judah, yet out of thee shall he come forth unto me that is to be ruler in Israel; whose goings forth have been from of old, from everlasting. (Micah 5:2)

Bethlehem. The name means “house of bread” and Ephratah means “fruitfulness.” The additional moniker served to distinguish this town from another of the same name in Zebulun (Joshua 19:15). By worldly standards, Bethlehem was a humble and insignificant little hamlet, a home to wheat and sheep farmers. Bethlehem is first mentioned in Genesis 39:19 as the burial place of Jacob’s beloved Rachel. One of Israel’s judges, Ibzan hailed from Bethlehem (Judges 12:8-10). Ruth, the Moabitess, met and married Boaz in Bethlehem and became the great-grandmother of King David (Ruth 4:17-22). Thus Bethlehem gained acclaim as “The City of David,” yet it remained “little among the thousands of Judah.”

Out of the little town of Bethlehem the prophet proclaimed would come forth He “that is to be ruler in Israel.” God promised David, “thine house and thy kingdom shall be established for ever before thee: thy throne shall be established for ever” (2 Samuel 7:16). That promise was repeated for David’s son, Solomon, with the condition that he continue in that pattern modeled by his father (2 Chronicles 7:17-19), but beginning with Solomon, that condition was unmet until at last Jeconiah (a.k.a. Jehoiachin and Coniah) caused the Lord to curse Solomon’s line saying “Write ye this man childless, a man that shall not prosper in his days: for no man of his seed shall prosper, sitting upon the throne of David, and ruling any more in Judah” (Jeremiah 22:30). Joseph, Jesus’ adoptive father, was from this cursed line (Matthew 1:11). But in this, God did not fail in His promise to David, for Mary too was of “the house and lineage of David” through another branch that did not include any of Solomon’s descendants (Luke 3:23-31). Her line was free of the curse, establishing Jesus’ right to the throne both legally and by inheritance.

So it was that in the “House of Bread” the Bread of Life (John 6:48) came into the world – He “whose goings forth have been from of old, from everlasting,” i.e. He is eternal. He said, “I am the bread of life: he that cometh to me shall never hunger; and he that believeth on me shall never thirst” (John 6:35). He also compared Himself to the vine and His followers as the branches. “I am the vine, ye are the branches: He that abideth in me, and I in him, the same bringeth forth much fruit: for without me ye can do nothing” (John 15:5). Bethlehem Ephratah – the Fruitful House of Bread – birthplace of the Fruitful Bread of Life.