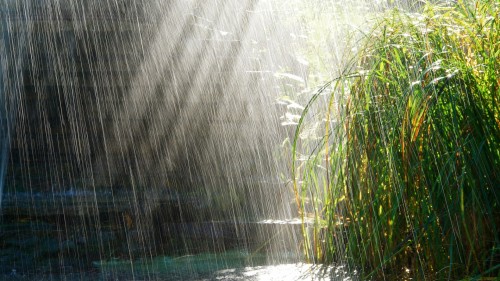 … for he maketh his sun to rise on the evil and on the good, and sendeth rain on the just and on the unjust. (Matthew 5:45)

As I sit here, I smell the scent of moist earth and feel the freshness of freshly washed ozone. For now, the night is quiet and peaceful save for the distant sound of a siren on its way to one emergency or another, but earlier it was not so. The same dark clouds that brought the much-needed moisture to my house also delivered large stones of ice to others. At this time of year, the same clouds that carry the welcomed precipitation can also harbor violent storms that wreak havoc on anything in their paths.

The rain, the hail, the violent storms do not discriminate. They bring blessing or blight to the righteous and the reproachable. While hail and tornados count for curses, rain generally adds up to a blessing. The Bible always regards rain as a blessing. In Bible times, before the advent of irrigation, farmers depended on the early and latter rains for the success of their crops. Both good and wicked men benefitted from the rainy seasons. In the days of Ahab, the wicked king of Israel (the Northern Kingdom), God withheld rain from the land for three years (1 Kings 17:1). Not everyone in the kingdom followed in the idolatrous ways of their king, but God withheld the rain, and many good people suffered the drought along with the wicked.

“The LORD is good to all: and his tender mercies are over all his works” (Psalm 145:9, emphasis mine). Sometimes we take note of the success of “sinful” people, and we wonder, “Why do the wicked proper when we do well just to get by?” The psalmist echoed the age-old question when he said:

The psalmist describes a common misconception we po folk have of the “well-to-do.” They do experience trouble even though the “window dressing” hides the pain inside. Trouble, like the sun and the rain, falls on the good and the bad.

Rain can be good or bad depending on one’s attitude toward it. The gardener appreciates the rain knowing that her garden prefers the nitrogen-enriched moisture from God’s distillery to the chlorine laden liquid that comes from a hose. The golfer may not appreciate the rain as much, especially when it interferes with his tee time.

Appreciation of God’s blessings, like rain, depends on the attitude of the recipient. God’s people, like the people of “the world.” come in all varieties – some poor, some rich and some anywhere in between. No matter what one’s financial status, God’s people recognize and appreciate the source of their blessings – their rain – and they are thankful. Recognizing that their blessings come from God, they use what God has given them to bless others.

Those of “the world” take God’s blessings, consume them on themselves, and use them for their gain and to further their desires. Of them the psalmist says:

He goes on to say, “Behold, these are the ungodly, who prosper in the world; they increase in riches” (Psalm 73:12). However, their “prosperity” is for this world only. The psalmist lamented as he pondered the question, “it was too painful for me; Until I went into the sanctuary of God; then understood I their end” (Psalm 73:17). Their end is not a pretty one: destruction, desolation, terror, despised of God (vv. 18-20). “When the wicked spring as the grass, and when all the workers of iniquity do flourish; it is that they shall be destroyed for ever” (Psalm 92:7, emphasis mine). Do not envy the prosperity of the world; it is for this world only. “For all that is in the world, the lust of the flesh, and the lust of the eyes, and the pride of life, is not of the Father, but is of the world. And the world passeth away, and the lust thereof: but he that doeth the will of God abideth for ever” (1 John 2:16-17, emphasis mine).

The child of God, whether rich or poor by this world’s standards, enjoys God’s blessings in this life and for eternity. “The LORD preserveth all them that love him: but all the wicked will he destroy” (Psalm 145:20).

Comments Off on Rain