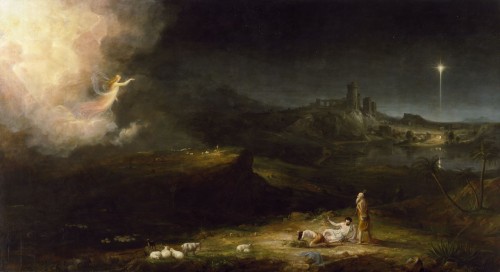 “And there were in the same country shepherds abiding in the field, keeping watch over their flock by night.” (Luke 2:8)

One of the best arguments against the birth of Christ having taken place in late December is this fact recorded by Luke in his Gospel. There were shepherds out in the fields watching over their flocks. By late December, there is not sufficient grazing to sustain large flocks of sheep. Jerusalem is near the same latitude as Dallas, Texas where I live. By the middle to the end of November, there is not much left for cattle to graze on, so they need to be fed on hay or “cake.” So it seems very unlikely that shepherds would be out in the fields in the winter time.

The shepherds around Bethlehem generally kept the sheep and goats that were used for sacrifice in the Temple in nearby Jerusalem. Some have suggested that Jesus’ birth was around late September which coincides with the Jewish Fall Feasts: Feast of Trumpets (Rosh Hashanah), Day of Atonement (Yom Kippur) and Feast of Tabernacles (Sukkoths). These were feasts that required all Jewish men to make a pilgrimage to the Temple in Jerusalem. The fact that this requirement happened to coincide with the decree from Caesar Augustus for the census (Luke 2:1) may explain why “there was no room for them in the inn” (Luke 2:7) for the expectant couple. In fact, His birth may have occurred during the Feast of Tabernacles making John’s statement that “the Word was made flesh, and [tabernacled] among us” (John 1:14) even more significant. Interestingly, if one counts back nine months from the end of September, one arrives at a date sometime in late December. It could be that rather than celebrating Christ’s birth on December 25, we are actually celebrating His conception!

Regardless, it was to these simple shepherds that this paramount announcement was delivered. “For unto you is born this day in the city of David a Saviour, which is Christ the Lord” (Luke 2:11). To these shepherds who were known for feeding and protecting their flocks; who sought out the lost sheep, and rescued those that were attacked. It seems appropriate that to these the news of the arrival of the “Shepherd of Israel” should be first delivered. He who would later say, “I am the good shepherd: the good shepherd giveth his life for the sheep” (John 10:11) had come. So without hesitation they said, “Let us now go even unto Bethlehem, and see this thing which is come to pass, which the Lord hath made known unto us” (Luke 2:15). They came “with haste” Luke tells us, “and found Mary, and Joseph, and the [Lamb of God] lying in a manger” (Luke 2:16). His name was Jesus, “for he shall save his people from their sins” (Matthew 1:21). This little Lamb of God, who was to be the Shepherd of shepherds, had finally come to them.