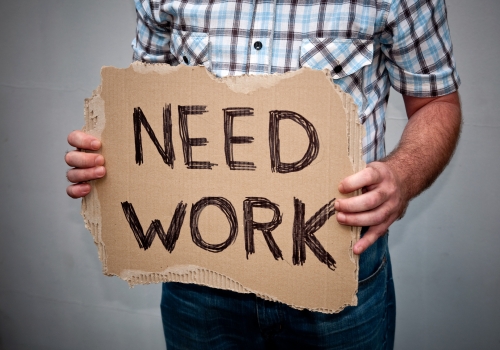 But Jesus answered them, My Father worketh hitherto, and I work. (John 5:17)

According to the U.S. Bureau of Labor and Statistics, the current unemployment rate as of this writing is 5.0%. On the surface, that looks pretty good, but when one considers that the unemployment rate rose to over 10% in late 2008 and remained there for almost four years before starting to drop; and that many that lost jobs then, and since then, remain unemployed and off the unemployment rolls, the current report is deceptive. The current statistic draws from a smaller pool of workers. With fewer jobs to go around, companies maintain minimum staffing simply to survive. Not to mention, Obama Care encourages employment of part-time help rather than hiring full-time employees to avoid paying health benefits. As a result, fewer workers are being laid off, so the unemployment number looks better than the actual unemployment. Sources differ, but the actual unemployment rate is somewhere between 40% and 60% meaning that at least half of the country is out of work.

The scarcity of work not only serves to stagnate the economy, but it potentially promotes an increase in crime and civil unrest. Having been created in the image of God (Genesis 1:26-27), humans need to work. Jesus made the point in John 5:17 (above) that God works, and He (Jesus) works. It follows, then that we, His creatures, must work; it comes with being created in the image of God.

Work is something God created for man’s benefit. God could have called the entire creation into existence in a nanosecond, but He “worked” in six days to set the pattern for us. Have you ever wondered why the 7-day week is ubiquitous in all the earth? Nowhere on earth is there a four-day week or a ten-day week. All across the earth, the world observes a seven-day week.

Work is God’s gift to us. Yes, work can become “laborious” because of the Fall (Genesis 3:17-19), but it remains in us to work because of the image of God which we carry. The psalmist, Moses, said, “Let thy work appear unto thy servants, and thy glory unto their children. And let the beauty of the LORD our God be upon us: and establish thou the work of our hands upon us; yea, the work of our hands establish thou it” (Psalm 90:16-17). We reflect the image of God through our work. Knowing that should encourage us to do our work with excellence. Modernizing Paul’s words he exhorts us: “[Employees], obey in all things your [employers] according to the flesh; not [only when they are watching you], as [flatterers]; but in singleness of heart, fearing God: And whatsoever ye do, do it heartily, as to the Lord, and not unto men; Knowing that of the Lord ye shall receive the reward of the inheritance: for ye serve the Lord Christ (Colossians 3:22-24).

Since work is something that God does which He imparted to His image bearers, is it any wonder there is so much unrest when there is no work to be had? It would be good, if our policy makers understood that.

One response to “Work”