First-century olive press in Capernaum on the northern shore of the Sea of Galilee, Israel

Then cometh Jesus with them unto a place called Gethsemane, and saith unto the disciples, Sit ye here, while I go and pray yonder. (Matthew 26:36)

We recently returned from our first “pilgrimage” to the Holy Land. If I never check off another item on my “bucket list,” this is enough. To walk in the land where God stamped His name defies description, so I will not even try. God assumed human form and traversed this land from Jerusalem to the Galilee; we also set foot on many of the same places.

On one of those stops, we visited the ruins of the city of Capernaum. Jesus made this city His “headquarters” as He ministered around the Sea of Galilee. Peter made his home here as did Andrew, his brother, and James and John, the sons of Zebedee. Here He called Levi (Matthew) away from the customs table to follow Him (Mark 2:1, 14). Capernaum was the site of many of Jesus’ miracles, yet the people did not believe (John 6:26-29); therefore Jesus cursed the city (Matthew 11:23-24). The city came to ruin from an earthquake the leveled it in 749 A.D.

In 1838, American explorer Edward Robinson discovered the ruins of ancient Capernaum,[1] and excavations at the site continue to the present. One of the more interesting finds uncovered at the site is an ancient olive press dating back to the first century. This olive press would have been used in Capernaum when Jesus lived there.

Olives growing on an olive tree on the Mount of Olives, Jerusalem, Israel

Olives, besides being good to eat, produce oil useful for many purposes. Extracting the oil from the olives required three pressings.[2] The first pressing extracted the purest “virgin” olive oil used for lighting the menorah and other lamps in the Temple. It was also for ceremonial anointing of special servants of God such as priests (Exodus 28:41; 29:4-7), kings (1 Samuel 15:1; 16:12-13), and also for the implements used in the Temple (Exodus 40:9). After extracting the virgin olive oil, the crushed olives were placed into burlap sacks, which were placed in the mortar table for a second pressing. A heavy weight was then added to the pestle wheel. The second pressing produced less pure oil suitable for common use such as cooking, medicine, and fuel for lamps. More weight was then added to the wheel for the third and final pressing, which extracted lye for making soap. At this point, the olives had nothing left to give.

In Jerusalem to the east of the Temple, across the Kidron Valley, rises a hill that has large olive groves aptly named the Mount of Olives or Olivet. 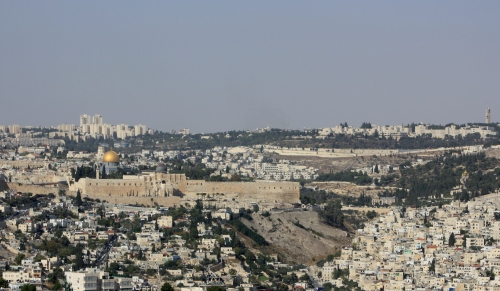 The Dome of the Rock stands where the Temple used to be in Jesus’ day. Across the Kidron Valley is the Mount of Olives where the Garden of Gethsemane was located.

In Jesus’ day, amongst the olive trees, there was a garden that had an olive press. The name of the garden was Gethsemane, which means oil press. On the night before His crucifixion, Jesus went there to pray with His disciples. He left eight of His disciples further down the hill, but His inner circle, Peter, James, and John, He took up to the place of pressing. “Then saith he unto them, My soul is exceeding sorrowful, even unto death: tarry ye here, and watch with me” (Matthew 26:38, emphasis mine). He knew way lay ahead for Him. The physical pain and agony He knew awaited Him would make any man seek to escape, but that was not what pressed on Him. He was God in the flesh. He was sinless. Soon, the sin of all mankind would fall on Him. Soon that sin would sever His relationship with the Father. “And he went a little further, and fell on his face, and prayed, saying, O my Father, if it be possible, let this cup pass from me: nevertheless not as I will, but as thou wilt” (Matthew 26:39, emphasis mine). He returned to His closest disciples only to find them sleeping (Matthew 26:40-41). The first press was done. “He went away again the second time, and prayed, saying, O my Father, if this cup may not pass away from me, except I drink it, thy will be done” (Matthew 26:42, emphasis mine.). “And there appeared an angel unto him from heaven, strengthening him” (Luke 22:43). “And he came and found them asleep again: for their eyes were heavy” (Matthew 26:43). The second press was complete. “And he left them, and went away again, and prayed the third time, saying the same words” (Matthew 26:44, emphasis mine). “And being in an agony he prayed more earnestly: and his sweat was as it were great drops of blood falling down to the ground” (Luke 22:44, emphasis mine). “Then cometh he to his disciples, and saith unto them, Sleep on now, and take your rest: behold, the hour is at hand, and the Son of man is betrayed into the hands of sinners” (Matthew 26:45). He gave all He had to give. With the final press completed, He said, “Rise, let us be going: behold, he is at hand that doth betray me” (Matthew 26:46, emphasis mine). He did not wait for His accusers to find Him. He went out to meet them!

There in the Garden of the Olive Press, He was pressed three times, and He gave His all. He gave up His anointing as King. He gave up His human body – the only suitable sacrifice for sin. He gave the last dregs of His being to cleanse us from our sins, and open the way to eternal life with Him, if we will only accept His sacrifice.

Reader, if you do not know Jesus who gave His all for you, do not delay any longer. Soon He will return, or you may otherwise meet your end. Either way, it will be too late. “Wherefore (as the Holy Ghost saith, To day if ye will hear his voice, Harden not your hearts, …” (Hebrews 3:7-8). Read my page on Heaven.