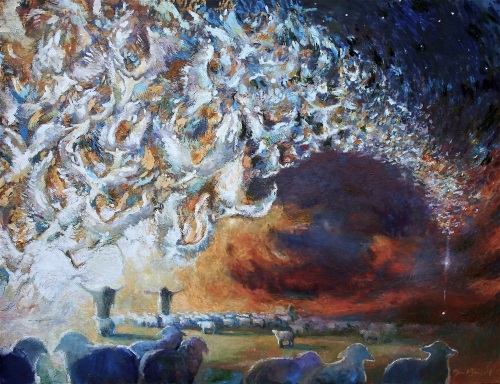 And suddenly there was with the angel a multitude of the heavenly host praising God, and saying, Glory to God in the highest, and on earth peace, good will toward men. (Luke 2:13-14)

It was mid-September.[1] The night was warm, and because the first quarter moon had not yet risen, the night sky was velvet black except for the billions of shimmering jewels strewn across the heavens. Several shepherds gathered around the campfire. Their sheep were all accounted for and safe in the stone sheepfold that had probably been built by King David himself. No one knew that for certain, but the shepherds took pride knowing that their hero king had once kept his sheep in these very hills.

The fire was strategically placed in front of the only entrance to the sheepfold[2] and the shepherds made their beds at the entrance to guard against unwanted intruders.[3] They joked and told stories of the recent events around Jerusalem. The population around Jerusalem always more than doubled around this time of year. It was the Feast of Trumpets, followed by the Day of Atonement and then the jubilant celebration of the Feast of Tabernacles. The law demanded that all Jewish males attend the feast and offer sacrifices at the Temple. The shepherds tended the flocks that would be used for sacrifices there.

However, this year the population grew ten times greater, it seemed. The Roman emperor, Caesar Augustus ordered a census of the population and demanded that everyone return to their ancestral homes to be counted. The shepherds did not have to go far. Their ancestors herded sheep on these hills for centuries, but that was not true for many others. It seemed that the whole world had descended upon Jerusalem. Even Bethlehem’s population grew beyond capacity. Out-of-town guests filled every square inch of every home packing people in like clumps of dates on a desert palm.

The shepherds, though, had all the room in the world – fresh late summer breezes, infinite starlit skies spanning the heavens, and room to stretch. The conversation slowly waned until all that could be heard above the whisper of the wind was the occasional bleating of a sheep. Suddenly, an explosion of light brighter than the noonday sun chased away every star in the heavens until only the burst of light remained. Futilely, they shielded their eyes in an effort to identify the source of the light. Vaguely they distinguished the form of a man, but they could not be sure. Gripped with terror, they fell to the ground hiding their faces from the overwhelming radiance.

Then a voice, melodious and soothing in tone like the sound of a spring as it skips its way across its rocky path, stilled their racing hearts. “Fear not,” said the voice. “I bring you good tidings of great joy, which shall be to all people” (Luke 2:10). The gentle voice eased their fear, and while the light maintained its brilliance, it too seemed warm and comforting. “Good tidings”? With all of the trouble in the world, they could certainly use some good news. The news was not for them alone, but for “all people.” So why were they selected as beneficiaries of this good news? They were ready to hear more.

“For unto you is born this day in the city of David a Saviour, which is Christ the Lord. And this shall be a sign unto you; Ye shall find the babe wrapped in swaddling clothes, lying in a manger” (Luke 2:11-12). This was indeed good news! Could this be true? Their long-awaited Messiah born in their hometown – in the birthplace of their hero shepherd King David?

This was too good to be true, but it must be true, otherwise why such a dramatic announcement! “And suddenly there was with the angel a multitude of the heavenly host praising God, and saying, Glory to God in the highest, and on earth peace, good will toward men” (Luke 2:13-14). As if the brilliance of the one angel were not enough, now the sky was filled with a host – thousands upon thousands – of angles echoing back and forth like clarion trumpets sounding a fanfare of an approaching king. The exhilaration transported the shepherds to the very halls of heaven. Then, just as suddenly as they appeared, they vanished. Temporarily blinded by the luminescence of the angelic host, the shepherds stood there dazed struggling to regather their wits and their night vision.

Slowly the stars reappeared in the blackness of the night. On the eastern horizon, the first quarter moon shown a dim reflective light. What now? “And it came to pass, as the angels were gone away from them into heaven, the shepherds said one to another, Let us now go even unto Bethlehem, and see this thing which is come to pass, which the Lord hath made known unto us. And they came with haste, and found Mary, and Joseph, and the babe lying in a manger” (Luke 2:15-16). Glory to God on high, indeed! The heavenly hosts were right. Here in such a lowly estate lay the One – the Prince of Peace – for all mankind, even for lowly shepherds.

[1]  Jesus may have been born on Feast of Tabernacles in 5 BC. Herod the Great died in 4 BC. In 5 BC, the Feast of Tabernacles took place between September 11 and September18. This is just speculation on my part based on the Apostle John’s account saying that “The Word became flesh and tabernacled among us” (John 1:14). The Gospels give us no hint as to the exact time that Jesus was born, but given that the shepherds were keeping sheep in the fields near Jerusalem suggests that it was for the purpose of the sacrifices offered on the Day of Atonement that precedes the Feast of Tabernacles.