Don’t Pray For This People! 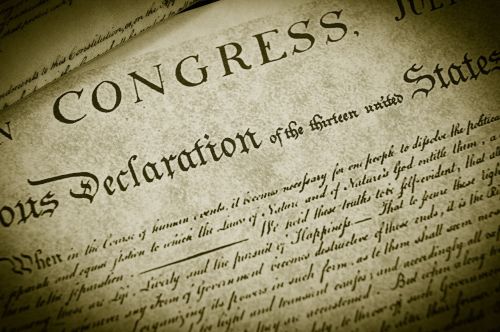 Therefore pray not thou for this people, neither lift up cry nor prayer for them, neither make intercession to me: for I will not hear thee. (Jeremiah 7:16)

The 238th anniversary of the birth of our nation quickly approaches, and I find my enthusiasm waning as the day draws near. Actually, it has been waning for quite some time now. Please do not misunderstand. I am about as patriotic as the next fellow, perhaps even more than most. Since the Obama Administration ascended to power, I have watched in amazement as the foundations of our nation crumble before our eyes and the Constitution systematically gets dismantled. Obama is not totally to blame. The foundations have been cracking for a long time now – removal of God’s Word and prayer from public schools, the wholesale ejection of God from the public square, the establishment of the Welfare State, the legalization of infanticide (abortion on demand legitimized by the pseudonym of Planned Parenthood and Pro-Choice), the dissolution of the traditional nuclear family (husband, wife, offspring), and the acceptance of homosexual unions as equal to heterosexual marriages. But the downward pull of the vortex has increased with the rise of the current administration.

I find little for which to celebrate. Some would be quick to remind me that we are to pray “For kings, and for all that are in authority; that we may lead a quiet and peaceable life in all godliness and honesty” (1 Timothy 2:2). That is true, and I believe we should, but even God has a limit as indicated by our starting verse. At that time, the people of Judah had fallen into idolatry. Whatever worship they did offer to God was substandard and merely rote ritualism. God was sick of it, and He told Jeremiah, “pray not thou for this people, neither lift up cry nor prayer for them, neither make intercession to me: for I will not hear thee” (Jeremiah 7:16). There comes a time when a people, as a nation, has so hardened their hearts against God that He will not even entertain an intercessory prayer for them. In fact to do so is to pray against God’s will. I think we have reached that point.

How can I be so sure about that? Romans 1:18-32 describes the downward spiral:

Is that not the state of our nation? Think about our President praising a professional basketball player for “coming out” and expressing his homosexuality. Think about how he has stifled DOMA (the Defense of Marriage Act) and has removed all restrictions from homosexuals serving in the military. Think about the culture of lies he has engendered in his administration: the IRS scandal, the VA scandal, the Benghazi scandal, Fast and Furious, and on and on. Then we have the mainstream media that offers its support with silence and the entertainment industry that sings his praises as though there is something praiseworthy.

This Sunday morning, Todd Starnes, author of God Less America, spoke at our church. He points out many of the same things I have listed here, but he is far more optimistic than I. I do not believe there is any turning back for this nation. Someone will remind me that God said, “If my people, which are called by my name, shall humble themselves, and pray, and seek my face, and turn from their wicked ways; then will I hear from heaven, and will forgive their sin, and will heal their land” (2 Chronicles 7:14). Allow me to point out that the oft quoted verse is taken out of context. It is specific to the Jewish Temple, Jerusalem, and Israel, and it does not have a general application for the Church. The Church is NOT Israel even though some who preach “replacement theology” insist that it is. Let me also point out that God’s people, the Church, possess a heavenly citizenship, not an earthly one (Philippians 3:20 NASB). Our concern should not be for an earthly nation, but for a heavenly one. More often we are exhorted to be law-abiding citizens except for where a human law violates the Law of God (Acts 5:29). There is only one exhortation for us to pray for our leaders (cited above). Beyond that, may God’s “will be done in earth as it is in heaven” (Matthew 6:10). Our nation has been judged. Should we pray for its healing against God’s will? Although it grieves me to say it, I think not.

What then are we to do? We should remain true to the faith. We must be bold in our witness. And we should never put more faith in our government than we do in God. Our citizenship, our loyalty, and our devotion must be to Christ above all else. Jesus Christ is Lord and our King!

For what it’s worth, Happy Independence Day!

2 responses to “Don’t Pray For This People!”