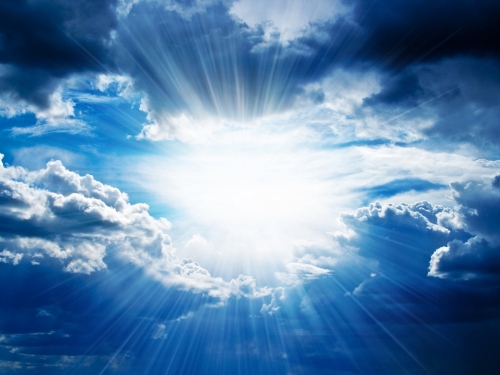 Ye men of Galilee, why stand ye gazing up into heaven? this same Jesus, which is taken up from you into heaven, shall so come in like manner as ye have seen him go into heaven. (Acts 1:11)

“Nephology” is the study of clouds. As a young boy between six and ten, I was quite the nephologist.  I could spend what seemed to be hours observing cloud formations in the blue Texas skies. Cloud types were of no great concern. I didn’t care if the clouds were cirrus, cumulus, cumulonimbus, or whatever; I searched for recognizable figures within the clouds: birds, dogs, giants, cars, etc.

I still study the clouds, but for a very different reason. In our passage above, Jesus had just spent His final 40 days on earth. Now He made His final declaration: “ye shall receive power, after that the Holy Ghost is come upon you: and ye shall be witnesses unto me both in Jerusalem, and in all Judaea, and in Samaria, and unto the uttermost part of the earth” (Acts 1:8). And as He said these final words, “he was taken up; and a cloud received him out of their sight” (Acts 1:9). What an incredible sight! It reminds me of watching my helium-filled balloon float away into the clouds as a boy. I stood there mouth gaping, staring after the vanishing orb until it became a dot and was finally swallowed up by the clouds. No matter how long I searched the skies, the balloon never reappeared. It was gone. Jesus’ disciples must have felt the same way. So consumed were they in their nephology that they failed to notice the newly arrived heavenly beings that now accompanied them. “Ye men of Galilee, why stand ye gazing up into heaven? this same Jesus, which is taken up from you into heaven, shall so come in like manner as ye have seen him go into heaven” (Acts 1:11).

I’m a nephologist not because I study clouds for weather patterns or even for the fanciful shapes my mind can conjure. I look to the clouds because Jesus ascended into the clouds and beyond, and the angels delivered His promise saying that He would return “in like manner.”

For the Lord himself shall descend from heaven with a shout, with the voice of the archangel, and with the trump of God: and the dead in Christ shall rise first: Then we which are alive and remain shall be caught up together with them in the clouds, to meet the Lord in the air: and so shall we ever be with the Lord. (1 Thessalonians 4:16-17, emphasis added)

After this I looked, and, behold, a door was opened in heaven: and the first voice which I heard was as it were of a trumpet talking with me; which said, Come up hither … (Revelation 4:1, emphasis added)

Henceforth there is laid up for me a crown of righteousness, which the Lord, the righteous judge, shall give me at that day: and not to me only, but unto all them also that love his appearing. (2 Timothy 4:8, emphasis added)

For the grace of God that bringeth salvation hath appeared to all men, Teaching us that, denying ungodliness and worldly lusts, we should live soberly, righteously, and godly, in this present world; Looking for that blessed hope, and the glorious appearing of the great God and our Saviour Jesus Christ; Who gave himself for us, that he might redeem us from all iniquity, and purify unto himself a peculiar people, zealous of good works. (Titus 2:11-14, emphasis)

I practice nephology daily hoping that perhaps today, I will see Him coming in the clouds.