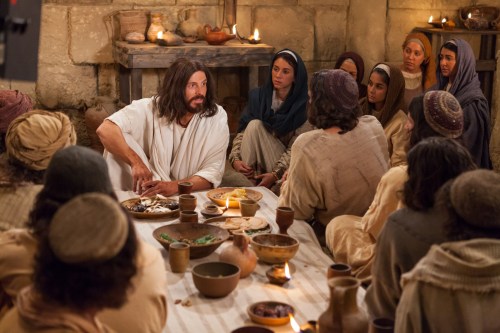 There came then his brethren and his mother, and, standing without, sent unto him, calling him. (Mark 3:31)

One of the tenets of the Roman Catholic Church holds that Mary, the mother of Jesus, remained a perpetual virgin her entire life, but that is not what the Gospels teach. Here in this passage from Mark’s Gospel, as well as in Matthew 12:46-50 and Luke 8:19-21, we see a different story.

According to Mark, Jesus had just selected His twelve apostles (Mark 3:16-19) and “went into a house” – probably Peter’s house in Capernaum right across the way from the local synagogue. Jesus had just completed a long day of healing the sick and casting out demons, and it was time to sit back and enjoy dinner with His disciples, but “the multitude cometh together again, so that they could not so much as eat bread” (Mark 3:20). Among the crowd were “scribes which came down from Jerusalem” (Mark 3:22) accusing Him of casting out demons by the power of “Beelzebub.”

Then He made this seemingly unrelated remark. “Verily I say unto you, All sins shall be forgiven unto the sons of men, and blasphemies wherewith soever they shall blaspheme: But he that shall blaspheme against the Holy Ghost hath never forgiveness, but is in danger of eternal damnation” (Mark 3:28-29, emphasis mine). Note that Jesus, as God, spoke by His authority: “Verily [truly] I say unto you.” By leveling the charge that Jesus cast out devils by the power of Satan, the scribes blasphemed against God Incarnate. However, Jesus did not rain down fire on them for their blasphemy; instead, He overlooked it and only pointed out the absurdity of such a charge.

As Trinitarians, we believe in the three-in-one nature of God: God the Father, God the Son and God the Holy Spirit. It stands to reason, then, that blasphemy of one is blasphemy against all.  Then why did Jesus single out blasphemy against the Holy Spirit as the unforgivable sin? It is the role of the Holy Spirit to “reprove the world of sin, and of righteousness, and of judgment” (John 16:8). He is “the Spirit of truth” which “will guide you into all truth, for he shall not speak of himself, but whatsoever he shall hear, that shall he speak: and he will shew you things to come” (John 16:13). Therefore, when the Holy Spirit speaks to a person’s heart and convicts that individual of the truth of the Gospel and his need of the Savior, and that individual rejects the message, he has effectively called the Holy Spirit a liar. That blasphemy cannot be forgiven.

About that time, Mary and her sons showed up from Nazareth. “There came then his brethren and his mother, and, standing without, sent unto him, calling him. And the multitude sat about him, and they said unto him, Behold, thy mother and thy brethren without seek for thee” (Mark 3:31-32, emphasis mine). Apparently, Jesus’ mother and brothers were well-known by the people. Later, when He returned to Nazareth “he taught them in their synagogue, insomuch that they were astonished, and said, Whence hath this man this wisdom, and these mighty works? Is not this the carpenter’s son? is not his mother called Mary? and his brethren, James, and Joses, and Simon, and Judas? And his sisters, are they not all with us? Whence then hath this man all these things?” (Matthew 13:54-56, emphasis mine).

Jesus was “the only begotten Son of God” (John 3:18), but He was not the only child of Mary. Jesus’ response to the notification that His family was calling for Him strikes us as somewhat aloof. “And he answered them, saying, Who is my mother, or my brethren?” (Mark 3:33). This was not the first time Jesus distanced Himself from His earthly family. Luke records the first occasion around the time of Jesus’ bar mitzvah. “And when he was twelve years old, they went up to Jerusalem after the custom of the [Passover] feast” (Luke 2:42). In all of the festivities, the boy Jesus got separated from His parents. They were on their way back to Nazareth a day’s journey before they noticed the missing child. When they returned, they found Him three days later in the Temple discussing Torah and astonishing the doctors of the Law (Luke 2:46-47). Like any worried parents, they laid the guilt trip on Him for worrying them, but Jesus’ response expressed where His true loyalty lay. “And he said unto them, How is it that ye sought me? wist ye not that I must be about my Father’s business?” (Luke 2:49, emphasis mine).

On another occasion at the beginning of His earthly ministry, He was invited to a wedding in Cana. During the festivities, the wine ran out, and Mary came to ask His help. Obviously, she had faith that He would resolve the problem. Jesus’ response to her comes across as rather detached. “Jesus saith unto her, Woman, what have I to do with thee? mine hour is not yet come” (John 2:4). Yet, as any good son, He complied with His mother’s request by turning water into wine.

However, we should not conclude that Jesus held no affection for His earthly family. Indeed, one His final acts from the cross was to see to the care of His mother. “Now there stood by the cross of Jesus his mother, and his mother’s sister, Mary the wife of Cleophas, and Mary Magdalene. When Jesus therefore saw his mother, and the disciple standing by, whom he loved, he saith unto his mother, Woman, behold thy son! Then saith he to the disciple, Behold thy mother! And from that hour that disciple took her unto his own home” (John 19:25-27, emphasis mine). John, the disciple “whom He loved,” was a close relative, probably a cousin, whom Jesus entrusted the care of His mother.

So Jesus’ response to the announcement that His mother and brothers were calling for Him should not be taken as lack of affection for His earthly family. No, Jesus had a greater lesson to teach. “And he answered them, saying, Who is my mother, or my brethren? And he looked round about on them which sat about him, and said, Behold my mother and my brethren!” (Mark 3:33-34, emphasis mine). Not all that sat in that place qualified for the privilege. Among them were those who blasphemed against Him by charging that His power to cast out demons came from Satan. However, many in the crowd did meet the standard as Jesus explained. “For whosoever shall do the will of God, the same is my brother, and my sister, and mother” (Mark 3:35, emphasis mine).

What is that will of God by which we join the family of God? “The Lord is not slack concerning his promise, as some men count slackness; but is longsuffering to us-ward, not willing that any should perish, but that all should come to repentance” (2 Peter 3:9). God’s will is “that all should come to repentance.” “For God so loved the world, that he gave his only begotten Son, that whosoever believeth in him should not perish, but have everlasting life” (John 3:16, emphasis mine). “But as many as received him, to them gave he power to become the sons of God, even to them that believe on his name” (John 1:12, emphasis mine). “For whosoever shall do the will of God, the same is my brother, and my sister, and mother” (Mark 3:35).