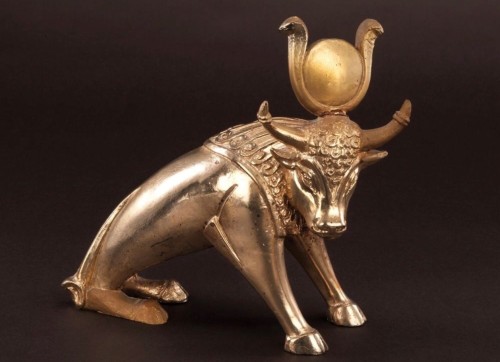 And the LORD said unto Moses, I have seen this people, and, behold, it is a stiffnecked people: (Exodus 32:9)

Stiffnecked—now there’s a word seldom heard today outside of careful Bible study. The English word, which should be hyphenated in modern English, appears only eight times in the Old Testament of the King James Bible and is really a translation of two Hebrew words: qâsheh and ‛ôreph (the nape of the neck). The first word, qâsheh, means “churlish, cruel, severe, obstinate, or stubborn.” This goes beyond simple hard-headedness. It characterizes an incorrigible, rebellious person, and it is not an attribute one would desire. Yet, in God’s evaluation of His Chosen People, He defined them as “stiffnecked.”

This assessment was not a rush to judgment on God’s part. These people earned the moniker. Consider how God acted on their behalf to free them from Egyptian bondage. God sent ten plagues against the Egyptians that effected only the Egyptians and spared the Israelites.[1] The final plague brought death upon every firstborn of every Egyptian household including their livestock. At the end of that plague, the Egyptians were only too happy to get rid of the Israelites and even sent them off with rich booty.[2] “And the Egyptians were urgent upon the people, that they might send them out of the land in haste; for they said, We be all dead men” (Exodus 12:33). Not long after they departed, Pharaoh changed his mind and followed in pursuit to bring them back to Egypt. Penned between mountains on one side and the Red Sea on the other, the Israelites witnessed God part the waters so they could cross over on dry ground. Then He closed the waters behind them and drowned the pursuing Egyptian chariots.[3] “And Israel saw that great work which the LORD did upon the Egyptians: and the people feared the LORD, and believed the LORD, and his servant Moses” (Exodus 14:31).

Not long after this miraculous deliverance, the Israelites arrived at a watering hole with bitter water and immediately started complaining.[4] God had Moses cast a tree into the watering hole and the waters became sweet. Then God made a conditional promise. “If thou wilt diligently hearken to the voice of the LORD thy God, and wilt do that which is right in his sight, and wilt give ear to his commandments, and keep all his statutes, I will put none of these diseases upon thee, which I have brought upon the Egyptians: for I am the LORD that healeth thee” (Exodus 15:26, emphasis mine).

Further down the road, they came to Elim and began complaining about their perceived lack of food. So God sent them manna (what is it? bread from heaven) and quail to eat.[5] Further along the way, they once again complained about the lack of water, so God provided water out of a rock.[6] God then defeated Amalek, the first enemy they encountered.

Then they arrived at Sinai, the Mountain of God. There, in the hearing of all the people, God gave them the Ten Commandments. They all heard the voice of God and were terrified. “And they said unto Moses, Speak thou with us, and we will hear: but let not God speak with us, lest we die” (Exodus 20:19). Moses ascended the mountain and wrote down the rest of the Law.[7] (At this point one should note that this occurred prior to Moses’ first 40-day stent on the mountain.) “And Moses wrote all the words of the LORD, and rose up early in the morning, and builded an altar under the hill, and twelve pillars, according to the twelve tribes of Israel … And he took the book of the covenant, and read in the audience of the people: and they said, All that the LORD hath said will we do, and be obedient” (Exodus 24:4,7 emphasis mine).

Hollywood movies have a way of distorting biblical accounts in ways that make them so memorable to the viewers that the Hollywood version supersedes the biblical narrative. In the movie, The Ten Commandments, Charlton Heston goes up the mountain to receive the Ten Commandments for the first time and returns to find the Children of Israel worshipping the golden calf. The movie plot kind of takes them off the hook a bit, because they did not know better; they did not have the Law. However, the biblical record shows that they were given the Law, written down by Moses, long before the golden calf incident, and they all agreed, “All that the LORD hath said will we do, and be obedient” (Exodus 24:7).

After all of Israel affirmed that they would abide by God’s Law, Moses ascended the mountain once more and received the Law written on stone tablets and was there 40 days and 40 nights.[8] “And he gave unto Moses, when he had made an end of communing with him upon mount Sinai, two tables of testimony, tables of stone, written with the finger of God” (Exodus 31:18, emphasis mine). These tables not only contained the Ten Commandments. They contained all the Law that the Children of Israel heard directly from God to which they agreed to obey. In addition, God gave Moses instructions for the construction of the Tabernacle and all of its furnishings. Great detail was given for consecrating the priests and the apparel they would wear, especially that of the high priest.

While Moses delayed, the people got antsy and went to Aaron, Moses’ brother and second in command, and asked Aaron, “make us gods, which shall go before us; for as for this Moses, the man that brought us up out of the land of Egypt, we wot [know] not what is become of him” (Exodus 32:1). As one reads the account, it becomes apparent that Aaron felt no coercion to comply with the request, nor did he hesitate. “And Aaron said unto them, Break off the golden earrings, which are in the ears of your wives, of your sons, and of your daughters, and bring them unto me” (Exodus 32:2). Aaron, who was intimately involved in the liberation of the Children of Israel, and heard the Ten Commandments directly from the voice of God, soon forgot the first two. “Thou shalt have no other gods before me. Thou shalt not make unto thee any graven image, or any likeness of any thing that is in heaven above, or that is in the earth beneath, or that is in the water under the earth” (Exodus 20:3-4).

Before Moses learned of the idolatrous act, God already knew. “And the LORD said unto Moses, I have seen this people, and, behold, it is a stiffnecked people” (Exodus 32:9). God threatened to destroy them all and start over with Moses, but Moses interceded on their behalf and the Lord relented from His anger.[9]

Moses descended the mountain and found a wild party going on around the golden calf. When Moses confronted Aaron about the idol, his answer was hilarious. “And I said unto them [the Israelites], Whosoever hath any gold, let them break it off. So they gave it me: then I cast it into the fire, and there came out this calf” (Exodus 32:24, emphasis mine). Imagine that!

This would not be the first exhibition of Israel’s stiffnecked behavior. Throughout their history, Israel chased after false gods. God would punish, Israel would repent, God would forgive, and Israel would sin again. This happened over and over. Once God banished them from the land for 70 years, and for a time, they appeared to learn their lesson. Then God sent their promised Messiah, and they rejected Him and nailed Him to a cross. Again, God banished them from the land for over 2000 years now. However, as God promised, He has restored them to the land; but the saga is not over. God is not finished with Israel.

The lesson we can learn from God’s dealings with Israel is that God is faithful. We can count on Him to do exactly what He says He will do. He keeps His promises. Before entering the Promised Land, Moses reminded the people, “The LORD did not set his love upon you, nor choose you, because ye were more in number than any people; for ye were the fewest of all people: But because the LORD loved you, and because he would keep the oath which he had sworn unto your fathers, hath the LORD brought you out with a mighty hand, and redeemed you out of the house of bondmen, from the hand of Pharaoh king of Egypt. Know therefore that the LORD thy God, he is God, the faithful God, which keepeth covenant and mercy with them that love him and keep his commandments to a thousand generations” (Deuteronomy 7:7-9, emphasis mine). Regardless of their stiffnecked character, God has kept and will keep His covenant with Israel. Knowing that gives us the assurance that God will be faithful in keeping His promise to us, “that whosoever believeth in him should not perish, but have everlasting life” (John 3:16). “For I am persuaded, that neither death, nor life, nor angels, nor principalities, nor powers, nor things present, nor things to come, Nor height, nor depth, nor any other creature, shall be able to separate us from the love of God, which is in Christ Jesus our Lord” (Romans 8:38-39). God is faithful even to the stiffnecked.

One response to “Stiffnecked”