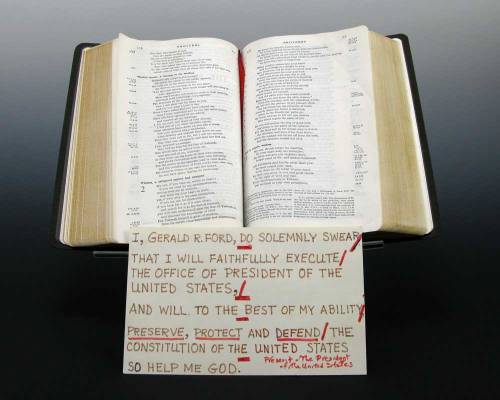 Bible and Cue Card Used by Gerald R. Ford When He Took the Oath of Office

And she brought forth a man child, who was to rule all nations with a rod of iron: and her child was caught up unto God, and to his throne.   (Revelation 12:5)

Recently the liberal news media bushwhacked presidential candidate Dr. Ben Carson for his statement that a Muslim should not serve as President of the United States. The statement found great support among conservatives, but left-leaning Democrats and Republicans were self-righteously offended by his remarks. Attempting to do some damage control without really backing down, Carson explained that someone who would place Sharia Law above the Constitution of the United States cannot honestly swear to uphold and defend the Constitution. Carson rightly pointed out that Islam is a theocracy – god rule. A true follower of Islam cannot separate his religion from his politics; they are one and the same. The Muslim holy book and other Muslim sacred writings call for strict adherence to Islamic law. (“Islam” means “submission.”) Therefore, if a faithful Muslim were to become President of the United States, “he” (because a Muslim woman would not be permitted to hold such an office) would have to, out of obligation to his religion, invoke Sharia Law when it came in conflict with the Constitution.

In his defense, Carson qualified his stance by saying that he could indeed vote for a Muslim as President, if that Muslim denounced Sharia Law and swore to uphold the Constitution in all cases. (Of course, the Qur’an encourages Muslims to lie to “infidels,” so their integrity would be questionable.) Furthermore, said Carson, he would not vote for a Christian, if that Christian advocated for a Christian theocracy. Our nation is and always has been a nation of laws, and the Constitution is the law of the land.

I fully understand and agree with Dr. Carson’s stance. What I believe is missing here is a clear understanding of what a theocracy is. According to Dictionary.Com, a theocracy is “a form of government in which God or a deity is recognized as the supreme civil ruler, the God’s or deity’s laws being interpreted by the ecclesiastical authorities.” The problem with that definition is in the word “recognized” and in the phrase “laws being interpreted by the ecclesiastical authorities.” That renders the definition false because it is humanistic in nature. First of all, the deity has to be “recognized” by man as the “supreme civil ruler” which means that ultimately it is man that is defining the laws of the god. Secondly, the laws are interpreted by men who are either appointed by men or self-appointed as “ecclesiastical authorities.” Ultimately the “theocracy” becomes an “androcracy” – a rule by men, so the “god-rule” goes out the window.

When God brought the children of Israel into the Promised Land, they had no king other than God. God gave His law to Moses and set up a system of priests and judges to administer His law. Not long after they settled in the land, reliance on God and His law fell by the wayside and “every man did that which was right in his own eyes” (Judges 17:6; Judges 21:25). Therein lays the problem with a theocracy – man.

A true theocracy is absolute rule by God. Until Christ returns to set up His kingdom on earth, any man-initiated theocracy is doomed to fail. When Christ returns as King of Kings and Lord of Lords, His rule will be absolute. Speaking of Christ, the Messiah, the Lord says, “Thou shalt break them with a rod of iron; thou shalt dash them in pieces like a potter’s vessel” (Psalm 2:9). When He returns, He will share His administration with His saints “And [they] shall rule them with a rod of iron; as the vessels of a potter shall they be broken to shivers: even as I received of my Father” (Revelation 2:27). There will be no question of authority because His eternal law will not be violated. “And out of his mouth goeth a sharp sword, that with it he should smite the nations: and he shall rule them with a rod of iron: and he treadeth the winepress of the fierceness and wrath of Almighty God” (Revelation 19:15).  The “sharp sword” from His mouth is the Word of God: “For the word of God is quick [i.e., “alive”], and powerful, and sharper than any twoedged sword, piercing even to the dividing asunder of soul and spirit, and of the joints and marrow, and is a discerner of the thoughts and intents of the heart” (Hebrews 4:12).

Until Jesus returns, no true theocracy can exist. Any so called theocracy devised by fallen man is thereby flawed. Dr. Ben Carson is right. Anyone adhering to any human defined theocracy is unfit to hold the office of President of the United States. As it stands, the U.S. Constitution, because of its foundation on God’s Law, must be upheld as the supreme law of the land.

4 responses to “The Theocracy Fallacy”