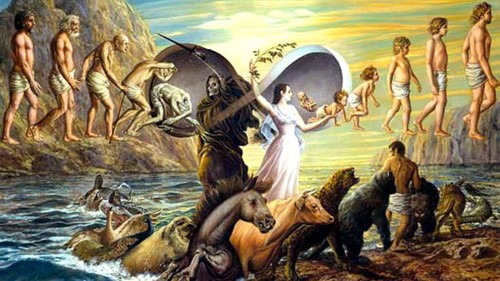 My twice-brother and I engaged in a discussion a few nights ago concerning the meaning of “the soul.” What is the soul? Most people think of the soul as the spiritual essence of a person. The English dictionary seems to support that view:

Our English language (especially American English) has “evolved” considerably since the founding of the United States, so I thought it might be interesting to see how the 1828 Webster’s Dictionary defined “soul.” I found the following definition:

The idea that the soul is the immaterial “substance” or “essence” that animates us enjoys a long history of support, but I think there is more to the soul than that. Normally, the first and second definition listed in a dictionary provides the general understanding of the word. However, in this case, I prefer the seventh definition provided by the 1828 Webster’s Dictionary. It basically says that “the soul” is a human being or a person, and I believe I can show scriptural support for that idea.

The best place to start is at the beginning. “In the beginning God created the heaven and the earth” (Genesis 1:1). “God,” ‘ĕlôhı̂ym, is a plural noun. We understand God as Triune being – Father, Son, and Holy Spirit – three persons (we say) in one “Godhead.” We simply say “God,” but we understand His Triune nature.

God created humans according to His image. “And God said, Let us make man in our image, after our likeness: … So God created man in his own image, in the image of God created he him; male and female created he them” (Genesis 1:26-27, emphasis mine). All humans bear the “image of God” and share many of His attributes albeit without the “Omni” prefix. It follows that we too possess a triune nature (more on that later).

As we examine the creation account, we see that God created all living creatures by divine fiat, i.e., He spoke them into being. However, He took special care in creating man. “And the LORD God formed man of the dust of the ground, and breathed into his nostrils the breath of life; and man became a living soul” (Genesis 2:7, emphasis mine).

Humans and air-breathing animals possess the “breath of life.” The Hebrew word neshâmâh is defined as: “a puff, that is, wind, angry or vital breath, divine inspiration, intellect or (concretely) an animal: – blast, (that) breath (-eth), inspiration, soul, spirit.”[3] We see in Genesis 7:22 that animals possess the “breath of life.” That phrase is also found in Genesis 6:13 and 7:15, but the Hebrew word for “breath” there is rûach, which means: “wind; by resemblance breath, that is, a sensible (or even violent) exhalation; figuratively life, anger, unsubstantiality; by extension a region of the sky; by resemblance spirit, but only of a rational being (including its expression and functions): – air, anger, blast, breath, X cool, courage, mind, X quarter, X side, spirit ([-ual]), tempest, X vain, ([whirl-]) wind (-y).”[4] Both neshâmâh and rûach are similar in meaning, but the latter includes the idea of a “spirit.”

To further confuse matters, Genesis 2:7 says that “man became a living soul.” The word “soul” is the Hebrew nephesh, which is defined as: “a breathing creature, that is, animal or (abstractly) vitality; used very widely in a literal, accommodated or figurative sense (bodily or mental): – any, appetite, beast, body, breath, creature, X dead (-ly), desire, X [dis-] contented, X fish, ghost, + greedy, he, heart (-y), (hath, X jeopardy of) life (X in jeopardy), lust, man, me, mind, mortality, one, own, person, pleasure, (her-, him-, my-, thy-) self, them (your) -selves, + slay, soul, + tablet, they, thing, (X she) will, X would have it.”  It is not difficult to see that nephesh is related to neshâmâh in that both carry the aspect of “breathing.” However, nephesh includes the physical aspect of the creature.

Both man and animals possess a nephesh. The Hebrew word first appears in Genesis 1:20. “And God said, Let the waters bring forth abundantly the moving creature that hath life, and fowl that may fly above the earth in the open firmament of heaven” (emphasis mine). The Hebrew words translated “hath life” are nephesh chay (life), or “soul life.” Also, the following verse reads, “And God created great whales, and every living creature that moveth, which the waters brought forth abundantly, after their kind, and every winged fowl after his kind: and God saw that it was good” (Genesis 1:21, emphasis mine). The Hebrew word translated “creature” is nephesh. I could give more examples, but I want you to stay with me on this.

We see that both man (humans) and animals have souls – nephesh. What differentiates a human soul from that of an animal is the way in which it was given. Recall earlier that God created animals by divine fiat. He also created them en masse. Man was unique. He created one human couple. He did not speak them into being as he did with the animals. He “formed” man – the Hebrew word yâtsar meaning to mold as a potter forms and shapes a clay vessel. Then God breathed into man His own breath “and man became a living soul” (Genesis 2:7).

Looking back at the 1828 Webster’s definition of “soul,” the seventh definition becomes clear here. The clay figure on the ground came to life when God breathed into it, and he became a human being, a person, a living soul – made in the image of God, with a triune nature like his Maker.

So, what is the triune nature of man? As I see it, just as God is Father, Son, and Holy Spirit, man is mind, body, and spirit. The Father, Son, and Holy Spirit is the God, or the Godhead if you prefer. The mind, body, and spirit is the soul. God has a physical body. That body is the Son, Jesus Christ. The other two “persons” of God are immaterial and invisible – the Father and the Holy Spirit. “No man hath seen God at any time; the only begotten Son, which is in the bosom of the Father, he hath declared him” (John 1:18, emphasis mine). Likewise, the mind and spirit of the soul are immaterial and invisible, but the body reveals the soul. We have all heard the expression, “The eyes are the windows to the soul;” the eyes are physical, but they often reveal what is “inside.” In summary, the soul is the entire being or person, mind, body, and spirit.

We can know that the soul is more than some nebulous ethereal, intangible animator of our being by the consideration given “the soul” in Scripture. For example, when God called Abraham (Abram) out of his homeland, we read, “And Abram took Sarai his wife, and Lot his brother’s son, and all their substance that they had gathered, and the souls that they had gotten in Haran; and they went forth to go into the land of Canaan; and into the land of Canaan they came” (Genesis 12:5, emphasis mine). Those “souls” (nephesh) were not disembodied spirits; they were people. When Abraham went down to Egypt he told Sarah (Sarai), “Say, I pray thee, thou art my sister: that it may be well with me for thy sake; and my soul shall live because of thee” (Genesis 12:13, emphasis mine). Abram was not thinking of his “spirit being;” he wanted to save his own skin! That nephesh refers to the whole person is clearly demonstrated when Abraham went to rescue his nephew Lot from the marauding kings of the north. “And the king of Sodom said unto Abram, Give me the persons, and take the goods to thyself” (Genesis 14:21, emphasis mine). The word translated “persons” is the Hebrew word nephesh.

Another part of the nephesh is the “mind.” We find that example when Sarah died, and Abraham negotiated for a plot of land in which to bury her. “And he communed with them, saying, If it be your mind that I should bury my dead out of my sight; hear me, and intreat for me to Ephron the son of Zohar” (Genesis 23:8, emphasis mine). The Hebrew word translated “mind” is nephesh.

I could cite many more examples, but these should suffice. The point is that we do not have souls; we are souls. Each soul made in the image of God is a triune being with mind, body, and spirit. For a soul to exist, all three must be present. Take away any one of the three, and the soul (at least in this present life) ceases to exist. A soul is immortal; it exists forever. However, because of Adam’s sin in the Garden, the physical part dies even though the mind and spirit continue; the soul is incomplete. At the end of time, the mind, body, and spirit will reunite for eternity, but not all souls will enjoy the same destiny. Some souls will live eternally in the presence of God; other souls will exist eternally separated from God in hell. Soul, where will you spend eternity? If you have doubts, please read my page on “Securing Eternal Life.”

6 responses to “The Soul”