The Days of Noah 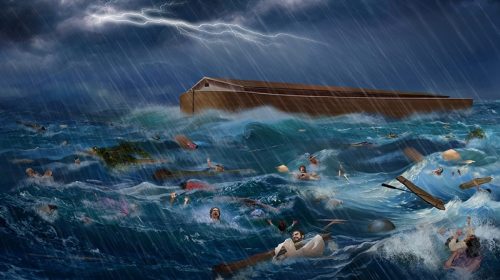 Last weekend was a sad time in American history. First, a mass murder took place at a Walmart in El Paso, Texas followed by another in Dayton, Ohio. The nation reels in the aftermath of such senseless violence groping for elusive answers to a problem with no apparent solution. The left blames the President claiming that his rhetoric is divisive and that it fans the flames of hatred. Others on the left blame the guns, and they want to ban all scary-looking rifles. Others want to legislate stricter gun laws. Even the President now calls for better background checks for gun purchases. Mr. President, we already have background checks for gun purchases. I had an FBI background check for every firearm I possess. Background checks will not stop wackos from getting their hands on firearms or from committing mass slaughter.

Several have accurately identified the problem as a problem of the heart, however, they fall short of coming up with a solution. As a Christian, I know the solution to the problem in every case. The answer is Jesus indwelling every individual heart, or at the very least, a clear understanding of who God is and every person’s accountability to Him. But that is out of the question. God is off-limits in our schools, our institutions of higher learning, in the public square and in our government. As long as that remains true, there is no solution to the growing violence in our nation.

This is a sign of our times. Jesus said that the days nearing His return would be like the days of Noah. What were the days of Noah like? Genesis Chapter Six suggests that fallen angels (sons of God) were somehow “breeding” with human women and producing demigod-like creatures known as the Nephilim (“giants”).[1] Today transhumanists[2] seek to evolve humans to a higher level through gene manipulation. These people, undoubtedly guided by the same “sons of God,” are unwittingly doing the same thing that was going on in Noah’s day.

However, that is not all that took place in Noah’s day. The Bible tells us that people had become exceedingly wicked and violent.[3] Our world grows increasingly evil and violent. The LGBT… movement has forced its way into our society demanding not only tolerance but that we accept their deviance as “normal.” However, that is not enough, they want our children trained at a very early age that such behavior is normal and acceptable. Not only that, but children are encouraged to follow their examples. If this were not bad enough, we have those in our government that promote and encourage this perverse movement, and if we protest, we are the “haters.”

The violence continues. Not only do we have mass shootings, but we are seeing more “peaceful protests” against our elected (Republican) officials that are anything but peaceful. We are living in the “days of Noah,” and Jesus said, “For as in the days that were before the flood they were eating and drinking, marrying and giving in marriage, until the day that Noe entered into the ark, And knew not until the flood came, and took them all away; so shall also the coming of the Son of man be” (Matthew 24:38-39). I have heard many sermons preached on these verses and they all minimize the significance of the text. Yes, Jesus said that the people during this time would be conducting their lives as normal, clueless of the impending doom. What these preachers omit is that in the days of Noah, the world was filled with wickedness and violence with much demonic activity taking place.

We should not be surprised or amazed when we see these things taking place, nor should we think that we can solve the problem through any human measure. The only remedy for our sick world is for Jesus to return to set things right. He is the only answer. He is our only hope. Our days are as the days of Noah. That should alert us to Jesus’ imminent return. The time is right. Are you ready? If not, find out how to get ready by reading my page, “Securing Eternal Life.”

7 responses to “The Days of Noah”