No King In Israel 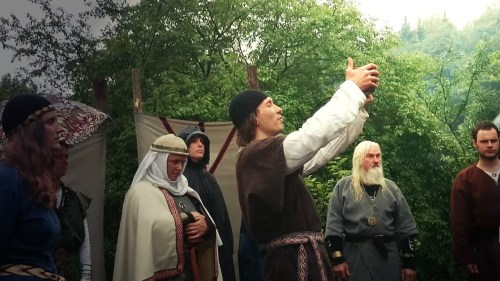 In those days there was no king in Israel: every man did that which was right in his own eyes. (Judges 21:25)

Thirty years after entering the Promised Land, Joshua died[1] without having accomplished that task God assigned the children of Israel, i.e., to rid the land of all its inhabitants. Even though God promised, “Every place that the sole of your foot shall tread upon, that have I given unto you, as I said unto Moses. From the wilderness and this Lebanon even unto the great river, the river Euphrates, all the land of the Hittites, and unto the great sea toward the going down of the sun, shall be your coast” (Joshua 1:3-4). Before entering the Promised Land, Moses encouraged Joshua, “And the LORD, he it is that doth go before thee; he will be with thee, he will not fail thee, neither forsake thee: fear not, neither be dismayed” (Deuteronomy 31:8). Joshua further encouraged the people, “Remember the word which Moses the servant of the LORD commanded you, saying, The LORD your God hath given you rest, and hath given you this land” (Joshua 1:13). The land was theirs for that taking. God had given it to them. They had only to “be strong and of good courage; be not afraid, neither be dismayed: for the LORD thy God is with thee whithersoever thou goest” (Joshua 1:9).

Accounts differ about the time it took for the “conquest” of the land. Joshua 18-19 records the dividing of the “inheritance” which took place seven to eight years after they crossed the Jordan.[2] In the process of conquering the land, the children of Israel made some compromises that came back to bite them,[3] and they became battle-weary of fighting giants even though God did most of the fighting for them.

Joshua was getting old, and God told him so.[4] He was 40 years old when he first entered Canaan to spy out the land.[5] God punished the children of Israel for their rebellion and unbelief by making them wander in the desert for 40 years. So by the time he entered the Promised Land, Joshua was already 80 years old. At the end of his life, Joshua was 110 years old[6] making his time in the land 30 years. In all that time, Israel failed to take the land God had given them. In that time, they forgot God’s encouragement not to fear. Joshua’s own tribe, Ephraim, complained, “And the children of Joseph [Ephraim and Manasseh] said, The hill is not enough for us: and all the Canaanites that dwell in the land of the valley have chariots of iron, both they who are of Bethshean and her towns, and they who are of the valley of Jezreel” (Joshua 17:16). This was only seven or eight years after seeing all that God had done in the near past and now they feared the giants and their “chariots of iron”! And Joshua spake unto the house of Joseph, even to Ephraim and to Manasseh, saying, Thou art a great people, and hast great power: thou shalt not have one lot only: But the mountain shall be thine; for it is a wood, and thou shalt cut it down: and the outgoings of it shall be thine: for thou shalt drive out the Canaanites, though they have iron chariots, and though they be strong” (Joshua 17:17-18). However, they did not complete the task, choosing rather to live among the Canaanites.

Without taking inventory, much of the land God “gave” Israel remained unconquered and worse, they failed to dispel the Canaanites that lived in the land contented rather to dwell among the pagans, something God had warned against.[7]

Joshua died “And also all that generation were gathered unto their fathers: and there arose another generation after them, which knew not the LORD, nor yet the works which he had done for Israel. And the children of Israel did evil in the sight of the LORD, and served Baalim: And they forsook the LORD God of their fathers, which brought them out of the land of Egypt, and followed other gods, of the gods of the people that were round about them, and bowed themselves unto them, and provoked the LORD to anger” (Judges 2:10-12). It was not long, perhaps 40-70 years, and they forgot all about God.

By my estimation, the period of the Judges lasted about 467 years after the “conquest” of the land. In that time God would punish them for their idolatry by instigating their Canaanite neighbors against them. They would cry out to God, and God would send a “judge” to deliver them. Some of those “judges” were not all that upstanding. For example, Gideon, after defeating the Midianites, erected a golden ephod in his city, “and all Israel went thither a whoring after it: which thing became a snare unto Gideon, and to his house” (Judges 8:27). Then there was the womanizing Samson, a Nazarite,[8] who killed a lion with his bare hands and later ate honey out of the carcass of the animal and shared it with his parents.[9] Touching dead animals violated the Mosaic Law[10], especially for a Nazarite.

The Book of Judges is a tragic history of Israel’s constant fall into idolatry and their rejection of God. The history ends with a sad account of a Levite that traveled to Bethlehem to retrieve his concubine (not wife) that had been unfaithful to him.[11] The woman had fled to her father’s house and the father was happy to entertain the Levite for several days before dismissing him to return with his concubine. They left late in the afternoon arriving at Jebus (Jerusalem) as it was getting dark. A man offered them lodging for the night and while they were there, some “sons of Belial” (worthless fellows) of the tribe of Benjamin came asking for the traveler so they might have sex with him. The man of the house begged them not to do such a wicked thing and offered them rather his daughter and the Levite’s concubine. The men settled for the concubine and raped her all night long. In the morning, the Levite found her dead at the doorstep. In anger, he took up his concubine and carried her body home. When he got home, he cut her body up in twelve pieces and sent the dismembered body to all the tribes of Israel. That incited all the tribes of Israel to come against Benjamin to seek a settlement for the wrong done. However, Benjamin would not turn over the violators and refused to repent. The dispute ended in civil war and the near destruction of the tribe of Benjamin. Out of 25,100 fighting men of Benjamin, only 600 escaped alive. The rest of Israel mourned the desolation of Benjamin and the possibility of losing one of Israel’s tribes. The other tribes had sworn not to give any of their daughters to the Benjamites because of their wickedness, but their complete annihilation was inconceivable. Their resolution was to have something like a Sadie Hawkins dance where they permitted the Benjamites to come and kidnap their daughters. Sad, but true, and “In those days there was no king in Israel: every man did that which was right in his own eyes” (Judges 21:25).

Toward the end of the period of the Judges comes the account of Ruth, a young Moabitess that lost her husband, Malon (meaning “sickly”) and returned with her widowed mother-in-law, Naomi, to Bethlehem. There she met Boaz, who was Naomi’s “kinsman-redeemer.” By law and by custom, Boaz was obligated to marry Ruth and “raise up seed” to his deceased next of kin, Malon. This he willingly did. As we read the account, Boaz was smitten with Ruth when he first laid eyes on her. Anyway, Boaz married Ruth, and she became the great grandmother of King David.[12] More than that, she entered the lineage of King Jesus.

Israel’s history is one of constant rebellion against God, but it is also a tribute to God’s patience, faithfulness, and love in spite of our rebellion and rejection. Beginning with the Fall, God had a plan for man’s redemption.[13] I think about our nation. This year marks 400 years since the landing of the Pilgrims on Plymouth Rock. Are we any different than the Israelites? Think of all God has given us. Think of all His blessings to our nation, and think of how we have rejected Him. No, we are no different. The Wuhan bug that threatens our lives and our economy has us hiding in our dens afraid to come outside for fear of catching Covod-19. Some say this is a punishment from God. Some hope that it will bring revival to our land. However, I have serious doubts about that. Remember how church attendance spiked when many feared the end of the world from Y2K? Remember how church attendance jumped after 9-ll? Those “revivals” were short-lived. We cannot even attend church services now, yet I know attendance at “cyber church” is at an all-time high. Praise the Lord! Some are being saved, however, once this is all behind us, things will return to normal and our nation will return its own form of idolatry – professional sports, entertainment of all sorts, the worship of money and material things, etc.

We are no different than the children of Israel. However, our God, is the same God of Israel. He is patient, faithful, and loving, and His plan is nearing its completion. Consider the world-wide effect of this pestilence. Think about the increased number and intensity of earthquakes in different places on the planet. Have you heard about the swarms of locust devastating crops in Africa and moving north? These are just some of the signs Jesus gave concerning the “end of days.” Soon Jesus will return and Eden will be restored. Are you ready to meet King Jesus? If not, visit my page on “Securing Eternal Life.”

[2]  “The Conquest of Canaan” – https://www.thesacredcalendar.com/book-of-joshua-conquest-of-canaan/

Comments Off on No King In Israel