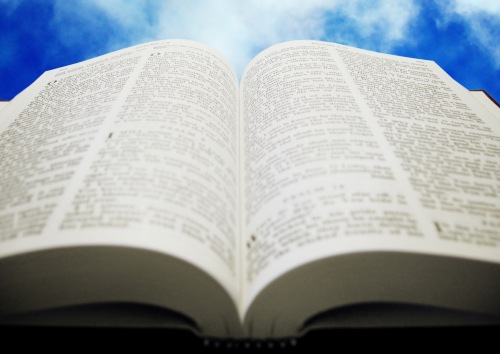 My dad went to be with the Lord a little more than six months ago. He taught me many things as I was growing up and even into my adult life, but one of the most valuable lessons he taught me was to trust God’s Word in all matters. Even when I can’t make sense of it, God’s Word is true. To the skeptic this may sound as circular reasoning.

Why do you believe in the Bible?

How do you know it’s true?

Because it’s the Word of God.

On its face, it may seem like circular reasoning, but it’s really not when one considers the source. Of essence, one must first believe in the existence of an omnipotent, omniscient God and that requires a certain amount of faith however small. “But without faith it is impossible to please him: for he that cometh to God must believe that he is, and that he is a rewarder of them that diligently seek him” (Hebrews 11:6).

After God created man, He placed him in a special garden and gave him only one rule: “of the tree of the knowledge of good and evil, thou shalt not eat of it: for in the day that thou eatest thereof thou shalt surely die” (Genesis 2:17). Man was free to eat the fruit of every tree in the garden except for this one. One would think that such a simple command should have been easy enough to obey considering the abundance of other choices they were given, but remarkably this was the very part of God’s Word that was challenged. “Yea, hath God said, Ye shall not eat of every tree of the garden? … Ye shall not surely die: For God doth know that in the day ye eat thereof, then your eyes shall be opened, and ye shall be as gods, knowing good and evil” (Genesis 3:1, 4-5). Just in case you weren’t paying attention, Satan, the serpent, first called God’s Word into question. Next he claimed God’s Word was a lie, and finally he claimed that God was keeping the couple from something better. From creation to the present, Satan’s strategy remains the same.

The Bible that we currently have was canonized around the fourth century AD, many of the source texts, especially the Old Testament texts, go back thousands of years. For that reason, the skeptics charge that the originals have been corrupted, and since we do not possess the original autographs, we cannot trust our modern Bibles. “Has God really said?” Next they deny the historical and scientific accuracy of the Bible. “God did not create anything; it all started from a Big Bang and after billions of years life emerged from random chemical reactions that evolved over millions of years and eventually resulted in our existence. It was all due to natural processes.” The skeptics can say what they want, but the Bible has NEVER been proven wrong. Finally, following the teachings of the Bible will keep you from being all that you want to be, and from doing whatever you want to do. “What! You don’t want to live your life as a monk (or nun) do you?”

The Bible has withstood all the challenges of the skeptics for centuries. One of the earliest criticisms of the Bible was that it mentioned the nation of the Hittites for which there was no historical record. Then late in the 19th century archeological discoveries revealed that not only did the Hittites exist, but they were a powerful empire. Archeologists continue to discover evidences that confirm the veracity of the Bible. Within the last century, the oldest Hebrew and Greek manuscripts found hidden in the caves of Qumran validate the accuracy of scriptural transmission when compared to the manuscripts previously known. This fact alone testifies to the imperishability of the Word of God: “The grass withereth, the flower fadeth: but the word of our God shall stand for ever.” (Isaiah 40:8).

Jesus said, “Heaven and earth shall pass away, but my words shall not pass away” (Matthew 25:35). He went further to say, “For verily I say unto you, Till heaven and earth pass, one jot or one tittle shall in no wise pass from the law, till all be fulfilled” (Matthew 5:18). What He was saying was that neither the smallest letter nor even the smallest distinguishing nuance of a letter will be lost until all is fulfilled. That is a remarkable claim for any author to make about his book, but Jesus made that claim about His Word. “So shall my word be that goeth forth out of my mouth: it shall not return unto me void, but it shall accomplish that which I please, and it shall prosper in the thing whereto I sent it” (Isaiah 55:11).