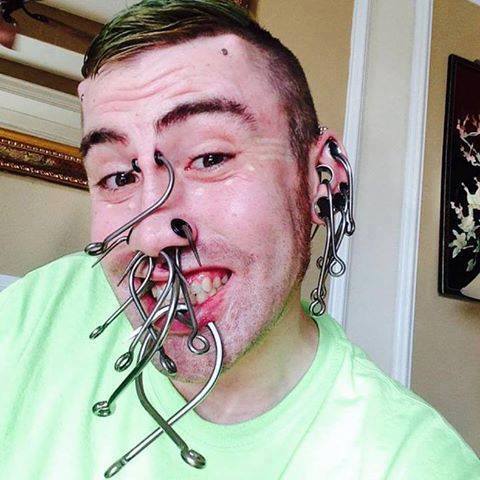 This photo appeared on my Facebook News Feed. I have no idea who is pictured in this photo.

“It is his body.” Is it really? The best place to start is at the beginning. On the sixth day of creation, the Triune God (Father, Son, Holy Spirit) said, “Let us make man in our image, after our likeness” (Genesis 1:26).  The Hebrew word translated “image” is tselem and it means an illusion, or resemblance – a representative figure. In other words, we were created to “look” like Him. God has a human body; His name is the Lord Jesus Christ. We were also created in His “likeness.” The Hebrew word translated “likeness” is demûth meaning resemblance or similitude. The commentator Albert Barnes notes that this implies a “‘likeness,’ in any quality.” Adam Clarke said:

The image and likeness must necessarily be intellectual; his mind, his soul, must have been formed after the nature and perfections of his God. The human mind is still endowed with most extraordinary capacities; it was more so when issuing out of the hands of its Creator. God was now producing a spirit, and a spirit, too, formed after the perfections of his own nature. God is the fountain whence this spirit issued, hence the stream must resemble the spring which produced it. God is holy, just, wise, good, and perfect; so must the soul be that sprang from him: there could be in it nothing impure, unjust, ignorant, evil, low, base, mean, or vile. It was created after the image of God … Hence man was wise in his mind, holy in his heart, and righteous in his actions.

So, as I look upon the young man in the picture, I see the image of God albeit marred. We take offense when we see some work of art vandalized. Our sensitivities are bruised when we see graffiti on public structures or buildings. Why? Because deep inside we know that the vandals do not have to right to disfigure the work of another. It is just wrong! In like manner, our bodies are God’s work of art! He created each one individually to bear His resemblance. The psalmist beautifully phrased it this way:

– I will praise thee [God]; for I am fearfully and wonderfully made: marvellous are thy works; and that my soul knoweth right well.

– My substance was not hid from thee, when I was made in secret, and curiously wrought in the lowest parts of the earth.

– Thine eyes did see my substance, yet being unperfect; and in thy book all my members were written, which in continuance were fashioned, when as yet there was none of them. (Psalm 139:14-16)

Can we really say that our body is our own to do with as we wish – that it’s our decision? The Bible teaches otherwise. “What? know ye not that your body is the temple of the Holy Ghost which is in you, which ye have of God, and ye are not your own?” (1 Corinthians 6:19). Some may object, “Paul is addressing Christians.” Yes, and I see many “Christians” following the pattern set by pop culture. Again, I do not know anything about the young man in the picture. For all I know, he may claim to be a Christian. One thing is sure, God knows. The point, whether he is or isn’t a Christian, is that he has taken it upon himself to vandalize the image of God that he bears; he has no “right” to do that. Having been created in the image of God, he has free will to do as he wishes, and he has reasoning abilities to distinguish and decide how to exercise his will. But just as any vandal, he does not have the right to disfigure, damage, or destroy another’s property. God’s creation – all of it – is His property.

Who does it harm? Well, think of the possibilities. First of all, this person obviously has a low regard of his own worth. I am no psychiatrist or psychologist, but it seems obvious to me that he is desperately trying to draw attention to himself. He feels invisible otherwise. No one really sees him, so this is one way to shout, “Here I am! See me?” Someone who has a low regard for his own life will certainly not have a high regard for someone else’s life. The young lady who defended him saying that he is not “a pedophile, a murderer or a rapist,” had nothing on which to base that assessment. A pedophile has no regard for the value of a young child’s life. A murderer has no regard for the life of another human being. A rapist does not value the great worth of a woman. None of these sociopaths value the lives of their victims, and upon close examination, none of them value their own lives.

Someone who is willing to distort and disfigure their own appearance cannot be trusted. Some of the commentators on the Facebook post noted that this young man would have a lot of trouble getting a job. Is it any wonder? Unless one is running a tattoo parlor or a pot house, how many employers would be willing to put a face like that on their business? How many (sober) moms out would entrust a young child to the care of someone that looks like this? Yes, I hear the outcries of the self-righteous saying, “Judge not, that ye be not judged” (Matthew 7:1 taken out of context). The “judging” in this case refers to God’s judgement, which is reserved solely to Him. But God, as part of His image, has given everyone the ability to “judge rightly,” i.e., discern. Further down in that same passage Jesus says, “Give not that which is holy unto the dogs, neither cast ye your pearls before swine, lest they trample them under their feet, and turn again and rend you” (Matthew 7:6). Obviously, one has to exercise a certain amount of “judgement” to discern what is “holy” and who are the “dogs” and what are “pearls” and who are the “swine.” Likewise we, even in our fallen state, have the ability to make certain judgment calls. In teaching about “false prophets” Jesus said, “[By] their fruits ye shall know them” (Matthew 7:20). What is “fruit” but what a tree puts forth that can be seen and tasted. In the winter, when the trees have all lost their leaves, I can’t tell one tree from another; but when the summer comes, and I see the fruit that a tree is bearing, I know what kind of tree it is. Even if I were blind, I would still be able to smell and taste the fruit. People are the same; if they “look” messed up, they probably are, and they have the potential of harming others.

Now, I do not want to cast a broad net. I realize that people make mistakes that they later regret and their lives change, but the outward scars remain. I also realize that there are some people who look really good on the outside, but inwardly they are rotten to the core. A recent case in point were the would-be ISIS terrorists shot down in Garland, Texas by police before they were able to carry out their act of terror. The two men came from Phoenix, Arizona where neighbors in their apartment complex testified that these were two really nice guys. They were friendly toward their neighbors, helpful, hard workers, etc. – certainly not the kind that would attempt to commit such an atrocity. It goes to show that you cannot always judge by what you see; but most of the time you can.

Leaving the judgment of the heart to God, let’s focus back on just the image in the picture. Here is the image of God, distorted, disfigured, damaged and permanently scarred. What would possess someone do that to themselves? May I suggest Satan? Consider that Satan was created as a high-ranking angel, an archangel to be exact. In ranking, he was next to God (See “Why Satan?”). He, along with all the other angels, was created before God created man on Day Six of creation. He observed God’s care in the creation of man. He noted that God created man in His own image — not so the angels including Satan (Lucifer was his name). Lucifer watched as God gave to man dominion over all of His creation (Genesis 1:26-29), and now the angels were to serve man: “Are they not all ministering spirits, sent forth to minister for them who shall be heirs of salvation?” (Hebrews 1:14). Oh! How this must have galled Lucifer! He has hated man ever since, and his goal from the beginning has been to mar the image of God – to destroy that which God most cherishes. When I look on the face of this young man, I see a young man so deceived by Satan that he succumbed to Satan’s bidding to mar the image of God that he carries. This image saddens me deeply. What saddens me more is when I see “Christians” ignorantly fall for the same deception – piercings, tattoos, immodest dress, vulgar language, etc. What kind of “fruit” do they exhibit? Appearances do matter. No one can judge the heart except God, but we are to bear His image and His likeness, and we cannot do that when we follow that pattern of the world that Satan displays as “pop culture.” Whose image shall we bear? Shall we persist on marring the image of God, or shall we remember that we “have put on the new man, which is renewed in knowledge after the image of him that created him” (Colossians 3:10).

3 responses to “Marring the Image”