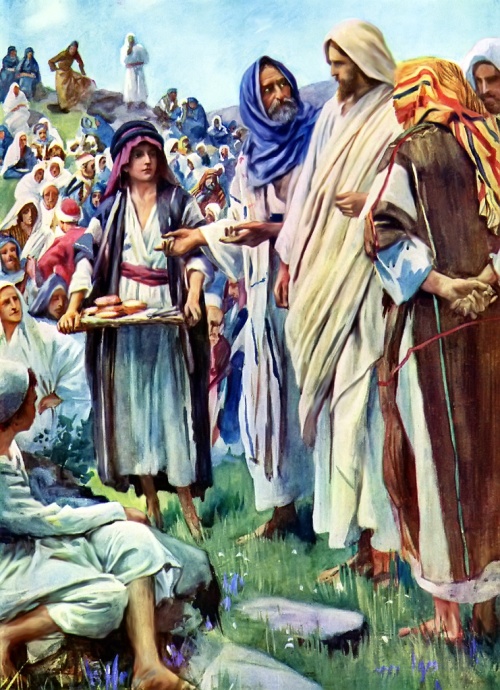 And a great multitude followed him, because they saw his miracles which he did on them that were diseased. (John 6:2)

The synoptic Gospel writers also recorded this fourth miracle selected by John. So impressive was this miracle, that the others recorded a second very much like it. Just as when Jesus turned the water into wine, Jesus took something simple and multiplied it into more than enough. I am talking about the time that Jesus took five barley loaves and two small fish and turned it into enough fish and chips to feed a crowd of over 5000 – and that was just counting men.

However, He could not shake the crowds. They sought Him out, but one senses that they sought Him out for selfish motives. Mark indicates that Jesus and His disciples were so busy ministering that they had no down time (Mark 6:31). “And a great multitude followed him, because they saw his miracles which he did on them that were diseased” (John 6:2, emphasis mine). Sometimes we tend to be that way. We follow Jesus because we expect to get something out of it, and then when we don’t get what we want, we abandon Him. Regardless, “Jesus went forth, and saw a great multitude, and was moved with compassion toward them, and he healed their sick” (Matthew 14:14, emphasis mine). How often Jesus meets our needs even though we are undeserving!

Jesus spent the day teaching and healing their sick until very late in the day (Matthew 14:15).  The Gospels tell us that the place they were was very remote, and apparently, no one thought to bring any food for the day.  The Synoptic Gospels tell us that the disciples came to Jesus to express concern about the lateness of the day and the need to send the people away so they could get something to eat (Matthew 14:15; Mark 6:35-36; Luke 9:12). They agree that Jesus told them, “You feed them” (Matthew 14:16; Mark 6:37; Luke 9:13). John, though, says that Jesus presented the challenge to Philip. “When Jesus then lifted up his eyes, and saw a great company come unto him, he saith unto Philip, Whence shall we buy bread, that these may eat? And this he said to prove him: for he himself knew what he would do” (John 6:5-6, emphasis mine).

John belonged to Jesus’ inner circle of three: Peter, James and John. He never names himself in his Gospel, but rather refers to himself as “the disciple whom Jesus loved” (John 13:23; 20:2; 21:7; 21:30). By his own account, he was very close to Jesus. He probably stayed close at Jesus’ side all the time. Therefore, it seems that he had a special vantage point that Matthew and the others did not have. Some think that Mark got his account from Peter, and Luke received his account second hand by interviewing eyewitnesses; but John was right there. So, it seems that Jesus presented the challenge to Philip first. “Philip answered him, Two hundred pennyworth of bread is not sufficient for them, that every one of them may take a little” (John 6:7). We often do the same when God asks something from us (knowing Himself what He will do), and the first thing that pops into our mind is “What’s it going to cost?” followed by, “We don’t have enough!”

Philip probably consulted with the other disciples, and they collectively came up with the great idea of sending them away so they could go buy their own food. Thus we have the account presented by the other Gospel writers. They also agree that someone had five barley loaves and two small fish, but it is John that records, that “One of his disciples, Andrew, Simon Peter’s brother, saith unto him, There is a lad here, which hath five barley loaves, and two small fishes: but what are they among so many?” (John 6:8-9, emphasis mine). Andrew must have felt that Jesus might be able to do something with the small offering. Otherwise, why would he even bring the boy to Jesus? Even so, the task was inconceivable.

According to Mark (who got it from Peter) Jesus had the disciples sit the people in groups of fifties and hundreds (Mark 6:40). “And Jesus took the loaves; and when he had given thanks, he distributed to the disciples, and the disciples to them that were set down; and likewise of the fishes as much as they would” (John 6:11). Jesus, the Creator God, took that small amount and multiplied over and over again, and all ate “as much as they would.” So abundantly did He provide that there were leftovers. “When they were filled, he said unto his disciples, Gather up the fragments that remain, that nothing be lost. Therefore they gathered them together, and filled twelve baskets with the fragments of the five barley loaves, which remained over and above unto them that had eaten” (John 6:12-13, emphasis mine). Some have suggested, and I think it is true, that twelve baskets where gathered so that each disciple would have a tangible witness of Jesus’ divine, creative power.

How often do we bring our can’t-be-done attitude to Lord when He has asked us to do something for Him? We may think we have little or nothing to offer, but God never asks us for great gifts or talents in order to accomplish great things. He asks us to bring the little that we have so that He can accomplish great things through it. When we are willing to trust Him with our little, He can do much, and He, not we, gets the glory. Give your five loaves and two fish to Jesus and let Him multiply them!

One response to “Jesus’ Seven Signs in John (4)”