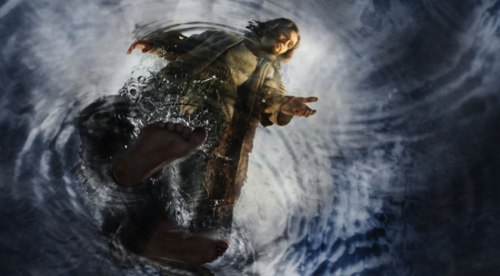 After feeding the 5000[1], a group of partakers (John 6:14) thought it would be a great idea to have a king that could provide them a free lunch (not unlike many in our country today). “When Jesus therefore perceived that they would come and take him by force, to make him a king, he departed again into a mountain himself alone” (John 6:15). I pointed out in last week’s article that throngs of people sought after Jesus, “but one senses that they sought Him out for selfish motives.”[2] They came either to see what He could do, or to seek a remedy to their personal maladies. The kingdom of God did not even register as a priority with them. Jesus saw that, but He “was moved with compassion toward them” (Matthew 14:14) anyway. He saw them as “sheep not having a shepherd” (Mark 6:34).

It comes as no surprise that they would make Him – one that could heal diseases and produce food out of thin air – their king, but He would have no part of that. Jesus did not come to be an earthly king, at least not at this time. “For the Son of man is come to seek and to save that which was lost” (Luke 19:10). So, before they could carry out their plan, Jesus secreted Himself away into the higher elevations of the mountain.

The different perspectives of the Gospel writers often lend themselves to criticism from the unlearned skeptics who purposefully strive to find error in Scripture. Such is the case in this account. Matthew and Mark say that “Jesus constrained [made] his disciples to get into a ship, and to go before him unto the other side, while he sent the multitudes away” (Matthew 14:22; Mark 6:45). John indicates that this was a unilateral decision by the disciples. “When Jesus therefore perceived that they would come and take him by force, to make him a king, he departed again into a mountain himself alone. And when even was now come, his disciples went down unto the sea” (John 6:15-16, emphasis mine). Matthew and Mark say nothing about some of the men wanting to make Jesus king; only John records that bit of information. As stated in my last article,[3] because of John’s close relationship with Jesus, his proximity to Him afforded him a closer perspective that the others did not have. When Jesus instructed the disciples to get into the boat and go to the other side of the lake, they followed His instructions without question, but John knew the reason. Since John recorded the reason for Jesus’ separation from the crowd, the fact that He had given instruction to the disciples to leave was of no consequence. Therefore, he merely mentions that they “entered into a ship, and went over the sea toward Capernaum” (John 6:17).

Off the disciples headed across the open waters of the Sea of Galilee. Because of the lake’s geographic location, cradled between two mountain ranges, winds funneling between the mountains frequently produce fierce storms. Without our modern weather forecasting technology, these storms were unpredictable to the sailors that ventured out on the lake. Thus, the disciples were caught up in a terrible windstorm. John records that “they had rowed about five and twenty [25] or thirty furlongs” (John 6:19) – only about three or four miles. They fought the wind all night. Matthew and Mark report that the wind was contrary, i.e. against them (Matthew 14:24; Mark 6:48). It was now about the “fourth watch” (by Roman standards) of the night making it between three and six o’clock in the morning. Fearful for their lives, and weary from battling the relentless wind “they see Jesus walking on the sea, and drawing nigh unto the ship: and they were afraid” (John 6:19).

Mark remarks that “he cometh unto them, walking upon the sea, and would have passed by them” (Mark 6:48, emphasis mine). Perhaps not apparent to the harried crew on the battered boat, Jesus was on more solid footing than they were. He could have just kept on walking. The sight frightened the already exhausted disciples. These men were not rocket scientists, but experience instructed them that men do not walk on water. Therefore, this apparition must be a ghost (Greek: phantasma)!

Perceiving their terror, Jesus called out to assuage their fears. “εγω ειμι μη φοβεισθε” – “I, I AM. Do not be afraid,” (Matthew 14:27; Mark 6:50; John 6:20). Not included as one of the seven-I AM statements, all three Gospels record the exact phrase (in Greek), once again asserting His deity. Unique to Matthew’s account is Peter’s request. “And Peter answered him and said, Lord, if it be thou, bid me come unto thee on the water” (Matthew 14:28).  Considering the circumstances, Peter made a bold request. He demonstrated even more chutzpah when he got out of the boat and started walking toward Jesus! “But when he saw the wind boisterous, he was afraid; and beginning to sink, he cried, saying, Lord, save me” (Matthew 14:30). The lesson there is “never take your eyes off Jesus!”

Perhaps because Mark’s Gospel is Peter’s account (as considered by many scholars), that detail was omitted. Peter had a way “talking big,” but then falling short of his boasts. This may have been one of those times he would rather put out of his memory. Peter really did walk on the water, but even after several steps of water-walking, he placed his faith in nature, rather than in the Creator of nature – and he sank.

John may have been too busy battling the storm to have noticed Peter’s audacious attempt to walk on water. He seemed more impressed by their instant arrival on land as soon as Jesus entered the boat. “Then they willingly received him into the ship: and immediately the ship was at the land whither they went” (John 6:21, emphasis mine).

Two aspects of this “sign” stand out as demonstrations of Jesus’ deity. The first is Jesus’ power over the physical laws of nature. Humans cannot walk on water. Peter proved that when he focused on the natural elements rather than on the God-Man, Jesus. Second, Jesus demonstrated power over time and space. The disciples had struggled all night and only covered about a fourth of the distance to their destination. However, as soon as Jesus came onboard, the storm ceased, and they arrived instantly at their destination.

Although the distance was still sizable, approximately 20 kilometers (or 10 miles) to reach Kfar Nahum (Capernaum), the boat immediately and safely touched the stony beach. This may sound like an unconnected-to-anything incident, but we will be at theological fault if we do not recognize that the distance and time are also, as is all creation, under the sole lordship of God himself [sic]. He alone lives outside of time and outside of distance, and as such, he [sic] is eternal and omnipresent. Therefore, this curious occurrence is actually very important because it shows that when the God-Man Jesus (Jn. 1:1,14) is in the boat with the disciples, the boat is able to disappear from one place on the map and re-appear in another in an instant.[4]

One other important point must be made if we are to take the connection between this Gospel and the Torah of Moses seriously, as we should. One of the key stories in the Torah is Noah’s ark. It glides over the waters of judgment, saving people. Jesus does the same. The parallels are obvious (perhaps too obvious) and ironically can be easily missed.[5]

No man can walk on water, but Jesus can, and, even for a moment, Peter did. How was that possible? Consider the fact that Jesus is the Creator. He established the laws of physics. He initiated the laws of physics; therefore, He has power over them. No created thing is greater than its creator. God-Jesus, exercises power over the physical laws He put into place and can suspend them at will. When He does, it is a supernatural act. We call that a miracle. Similarly, humans, at this point in time, cannot “teleport” themselves from one location to another. It makes for good science fiction, but otherwise it is impossible. God is not confined to time and space. Matthew and Peter were so overwhelmed by Jesus’ walk on the water that they completely overlooked what John keenly observed – they covered the remainder of the distance in no time at all. Only God can span time and space instantaneously. Jesus performed an “act of God” demonstrating once again that He is indeed God.

There are no storms in your life that He cannot calm, and when you feel that you are drowning at sea, simply cry out, “Lord, save me!” (Matthew 14:30).  His hand will be there to pull you up. When the winds of life blow contrary, invite Jesus into your boat, and He will get you to your destination, safe and sound.

Comments Off on Jesus’ Seven Signs in John (5)