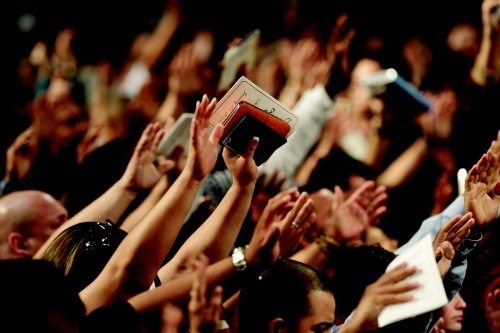 If my people, which are called by my name, shall humble themselves, and pray, and seek my face, and turn from their wicked ways; then will I hear from heaven, and will forgive their sin, and will heal their land. (2 Chronicles 7:14)

This oft-repeated verse offers a tenuous hope for American Evangelicals that, if we only put its tenets into practice, God will keep His end of the deal and heal the trouble in our land. However, as I have asserted in the past[1], this verse is taken out of context and misapplied. If Israel’s history can teach us anything, it is that God has His limits when He will no longer hear the pleas for a nation.[2]

Recent history teaches us that, in regard to God, Americans are a fickle people. Following one disaster after another, America has turned to God in repentance only to return to its vomit[3] as soon as things get better. We find ourselves in a mess again. The Wuhan Bug paralyzed our nation with fear. Everywhere you look you find masked people avoiding contact with one another. You can even see masked people driving cars or walking outdoors. Fear over COVID-19 has shut church doors for fear of retribution by authorities and also for fear of spreading the virus.[4]

Unrestrained rioting in the streets of many of our major cities adds to the fear of many Americans, and everyone can see that our country is in serious trouble. Consequently, many evangelical leaders call on American Christians to pray for revival in our nation (again). They sincerely believe the promise that “The effectual fervent prayer of a righteous man availeth much” (James 5:16), and we can reverse the course our nation. Without getting into differences of eschatological views, many of these believe that through the hard work of prayer, Christians will turn the world around and usher in the millennial reign of Christ.

The prophet Jeremiah encountered a similar optimist in Hananiah.[5] God had already told Jeremiah that Judah would go into Babylonian captivity, and to demonstrate by way of an object lesson, God instructed Jeremiah to carry around a heavy ox yoke to illustrate the bondage into which Judah was going. However, Hananiah painted a different picture, “Thus speaketh the LORD of hosts, the God of Israel, saying, I have broken the yoke of the king of Babylon” (Jeremiah 28:2), and he took the yoke off of Jeremiah and broke it to demonstrate what God would do. But that was not God’s plan, and Judah soon came under the yoke of Babylon for 70 years. Hananiah, the false optimistic prophet, did not live out the year for speaking falsely in the name of the Lord.

I am not a prophet, at least not like those through whom God spoke in the Bible. But I do study the Word, and I try to see the world through the lens of Scripture. In Scripture, God’s “chosen” people were punished for their disobedience and their idolatry – which involved sexual perversion and infanticide in their worship. If God so dealt with “His” chosen nation what makes us think that we will fare better just because we pray? Not every person in Judah was corrupt. Take for example Daniel, Hananiah (not the false prophet), Mishael, and Azariah;[6] they went into Babylonian captivity and they maintained their devotion to God. Surely there were others, but that did not stop God from punishing the “nation” of Judah for their sin. Nor will He save our nation at this point for our national sins even though “His people” pray.

Consider the downward spiral of sin described in Romans 1:18-32 and compare that to our nation. Our nation holds truth in unrighteousness. Our nation denies God and promotes the idea that all things came into existence by natural causes, and though they cannot prove their ideas, they invent “just so” stories and present them as facts. We profess ourselves to be wise, but indeed we are fools and only deceive ourselves. Rather than worship the Creator, we worship the creation and in our own feebleness attempt desperate measures to protect the planet (The Green New Deal).  As a consequence of our denial of God, He has turned over our nation to perverse lusts “to dishonour their own bodies between themselves” (v. 24). Think about the various ways we disfigure our bodies through tattoos, body piercings, the unnatural coloring of hair, other types of mutilations, homosexual perversions of all kinds, etc. God has turned over our nation to the “vile affections” of homosexuality – women with women, men with men, and even the sexual perversion of children. God has given over our people to “reprobate minds” so that they are incapable of reasonable thought. Simply consider the irrational reasoning they offer in support of some of their crazy ideas about climate change, about abortion, about the benefits of socialism, etc. Does it seem that the world has lost its collective mind? It has because God has allowed it as punishment for our sin.

Look at how Paul’s description perfectly fits America today. “Being filled with all unrighteousness, fornication [any sex outside the bonds of marriage], wickedness, covetousness, maliciousness; full of envy, murder, debate, deceit, malignity; whisperers, Backbiters, haters of God, despiteful, proud, boasters, inventors of evil things, disobedient to parents, Without understanding, covenant-breakers, without natural affection, implacable, unmerciful: Who knowing the judgment of God, that they which commit such things are worthy of death, not only do the same, but have pleasure in them that do them” (Romans 1:29-32, emphasis mine). Does that not fit America today?

Do you know what God told Jeremiah about praying for the people of his day? God said, “Don’t pray for these people.”[7] Their grace period had expired. I fear America’s grace period has also expired, and God is saying, “Don’t pray for these people.” The train is hurtling downhill fast and the brakes are out. Our Lord’s return gets closer by the day. Every new fire ignited by lawless rioters brings us closer. Every murder that takes place closes the gap. Every baby that is aborted draws the noose tighter. Jesus is the only fix to this broken world.

Still, we pray. We are instructed to pray for our leaders[8] that we might live “peaceable” lives, but that does not necessarily equate to praying for the salvation of a too-far-gone nation. I could be wrong, but as I have searched the New Testament, I do not find any admonition to pray for the nation, the leaders yes, but not the nation. I would like to see a national revival, but I sincerely doubt that it will happen. Our national track record in that regard testifies to the improbability of that happening. Still, my baby brother and I will join thousands of others on the Mall in Washington DC on September 26 for a Franklin Graham sponsored prayer march on the nation’s capital.[9] We will march from the Lincoln Memorial, past the Washington Monument and on to the steps of the Capitol. We will march, and we will pray as we go. If the direction of the nation is to change, our leaders need to change either physically or spiritually.

One response to “National Revival”